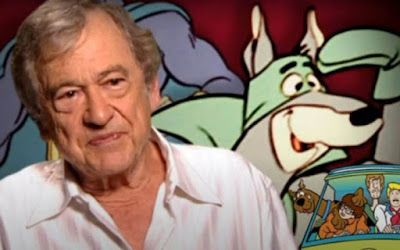 The simple tales of Scooby and four teenagers hunting ghosts in their “mystery machine” van first aired on CBS in America in 1969. It soon became a huge success in the UK, too, and went on to become a global franchise worth billions of dollars.

Scooby and his gang, Norville “Shaggy” Rogers, Velma Dinkley, Daphne Blake and Freddie Jones, were dreamed up by Ruby and Ken Spears, Hanna Barbera’s head storymen, after Joseph Barbera had been approached by the CBS executive programme maker Fred Silverman.

Silverman wanted a child-friendly cartoon “mystery show” with the working title “Who’s S-S-Scared?” for the station’s Saturday morning slot. It was Ruby and Spears who suggested that a dog should be the star of the show. They originally thought of a creating a big, comically cowardly sheepdog, before settling on a Great Dane.

The dog was originally going to be called Too Much but, listening to music on a flight from New York to Los Angeles, Silverman misheard Frank Sinatra’s scat sequence at the end of Strangers in the Night: “As we’re going in for the landing, Frank Sinatra comes on and I hear him say ‘Scooby dooby doo’.”

At first the CBS thought the artwork for the Great Dane was “too frightening” for an intended audience of children, but Hanna-Barbera’s art director Iwao Takamoto saved the day by making Scooby comically big and clumsy, with a hump back, bowed legs and big chin.
Don Messick, the voice of Muttley on Wacky Races, was picked to speak Scooby-Doo’s lines and decided to add to the comedy by introducing rolling r’s into Scooby-Doo’s speech pattern. The dog would frequently say “Ruh-roh, Raggy” as he jumped into the arms of his hapless sidekick Shaggy.

Scooby-Doo, Where Are You? was an instant hit on CBS, and the early programmes created a formula for several revivals as well as film adaptations, numerous spin-off series and lines of merchandise. Scooby-Doo routinely features in polls of the best cartoon characters of all time.

The series also spawned suggestions of inner meanings. The way that Shaggy was always giggling in the back of the Mystery Machine, and was constantly suffering from “the munchies”, fuelled rumours that the character was a hippy “pothead”, while there were claims that “Scooby Snacks” were not really dog biscuits, but cannabis brownies.
However, in his memoir My Life With a Thousand Characters, Iwao Takamoto denied there were any veiled drug references in the series: “Drugs of any kind were an anathema to Joe Ruby; he hated them.”

Joe Clemens Ruby was born on March 30 1933 in Los Angeles, where he attended Fairfax High School. During the Korean War he served in the US Navy as a sonar operator on a destroyer.

He began his career at Walt Disney Productions as an assistant animator, before moving to Hanna-Barbera Productions, where he met his writing partner Ken Spears in 1959.

As well as Scooby-Doo, the pair were credited with creating cartoon characters including Dynomutt, Dog Wonder, Jabberjaw, The Barkleys, and The Houndcats.

In 1977 they founded their own production company, Ruby-Spears, which created Alvin and the Chipmunks, Mr T, Superman and Thundarr the Barbarian.

Ruby also wrote the sci-fi thriller series Planet of the Apes (1974) and the horror film Rumpelstiltskin (1995).

Joe Ruby is survived by his wife Carole, whom he married in 1957, and by two sons and two daughters.
Posted by anim8trix at 12:00 AM