"It's a beautiful day outside,
so let's stay indoors to watch anime!"

VINLAND SAGA
Plot Summary: Young Thorfinn grew up listening to the stories of old sailors that had traveled the ocean and reached the place of legend, Vinland. It's said to be warm and fertile, a place where there would be no need for fighting—not at all like the frozen village in Iceland where he was born, and certainly not like his current life as a mercenary. War is his home now. Though his father once told him, "You have no enemies, nobody does. There is nobody who it's okay to hurt," as he grew, Thorfinn knew that nothing was further from the truth. The war between England and the Danes grows worse with each passing year. Death has become commonplace, and the viking mercenaries are loving every moment of it. Allying with either side will cause a massive swing in the balance of power, and the vikings are happy to make names for themselves and take any spoils they earn along the way. Among the chaos, Thorfinn must take his revenge and kill Askeladd, the man who murdered his father. The only paradise for the vikings, it seems, is the era of war and death that rages on.
2:45 - 4:40    Weathering With You [Movie] 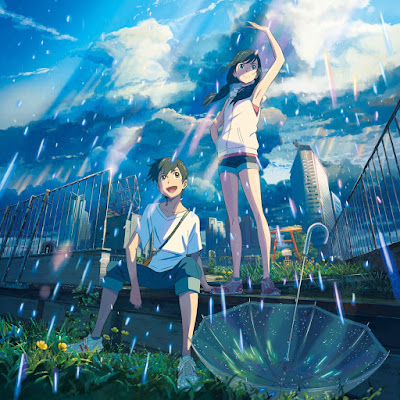 Weathering With You
Plot Summary: In June 2021, first year high schooler Hodaka Morishima leaves Kōzu-shima in order to get to Tokyo. When his ferry to the city is hit by a rainstorm, he is saved by Keisuke Suga, who gives Hodaka his business card. As Hodaka becomes broke and struggles to find work, he meets Hina Amano, an employee of McDonald's restaurant. She takes pity on him and gives him food. Later on, Hodaka finds an abandoned handgun in a waste bin he fell onto. After tracking down Suga's business location, he meets him there and his niece, Natsumi. Suga hires him as his assistant at a small occult magazine publishing company, where they investigate urban legends related to the unusually rainy weather in Tokyo. From a psychic, they hear the legend of a "sunshine girl" who can control the weather.

Hodaka sees Hina being intimidated into working at a back-alley club. He scares off the club owners by firing his gun into the air, thinking it was a toy. He and Hina escape; she takes him to Yoyogi Kaikan, an abandoned building with a shrine on its roof, where he throws the gun away. Hina astonishes Hodaka by demonstrating her ability to clear the sky by praying. Hodaka finds out that Hina lives alone with her brother Nagi, and they have no adult guardian. Seeing how they are in a financial trouble, Hodaka proposes to start a business with Hina with the ability of sunshine girl: a job to clear the weather for events such as weddings and parties. They create a website to accept orders and their business quickly becomes a success. However, when clearing the sky for the Jingu Fireworks Festival, Hina is shown on television and their site gets flooded with requests, so they decide to close their business.

A detective with the police search for Hodaka, as his family filed a search request. They find out that Hodaka was caught using the gun on a security camera. Officers arrive at the apartment where Hina lives with Nagi and interrogate her; Hina realizes that because they have no legal guardians, with their mother having died recently, social services are going to take them into custody. Hodaka visits Suga, who has also been visited by the police. Suga fires him and gives him a retirement allowance, explaining that the police suspect him of kidnapping Hodaka. Hodaka, Hina and Nagi try to run away, but they are halted by a heavy rainstorm and snowfall. They take shelter in a love hotel, and spend the night with instant food and doing karaoke. Hina reveals that her body is slowly turning into water. She explains that she is the cause of the abnormal weather and is intended to be a human sacrifice; her disappearance will return the weather to normal. Hodaka promises to protect her, but the next morning, Hina has vanished into the sky and the rain has stopped.

The police steps into the hotel room, sending Nagi to the children's counseling center and taking Hodaka to the police station. Having already fallen in love with Hina, Hodaka decides to bring her back to Earth and escapes from the police custody with the help of Natsumi and her Honda Super Cub. After her motorcycle is immobilized, Hodaka resumes on-foot to Yoyogi Kaikan building to reach the shrine. Inside, he encounters Suga, who attempts to stop him. The police surround Hodaka, but Suga, now inspired by Hodaka's desperation to see Hina, helps him escape. At the roof-top shrine, Hodaka jumps through the shrine gate and is transported into the sky, where he finds Hina and asks her to leave with him, insisting that Hina let go of her worries about the weather and start living for herself. As soon as they come back to the rooftop shrine, Hina, Hodaka, Natsumi, Nagi, and Suga are all arrested, and the heavy rains resume. Hodaka is sentenced to a three-year probation and sent back to his home Kōzu-shima.

Three years later, the rain has been falling without end in Tokyo, submerging much of the city. In the spring of 2024, having finished his probation, Hodaka graduates from high school (2 of his classmates ask whether he was wanted by the Tokyo police while he thinks it is a love proposal coming his way) and returns to Tokyo to join the university. He meets with Suga, who has expanded his business. Suga encourages him to find Hina, After all they've been through, will they finally reunite?