Cinematics from Tales of Runeterra

Tales of Runeterra
▶ Watch the Cinematics
League of Legends takes place in the fictional world of Runeterra. In Runeterra, the champions of League of Legends are a collection of heroes and villains who have a variety of backstories, often related to the political struggles of the various countries of the main continent of Valoran. Additionally, some champions are extraplanar and come from worlds other than Runeterra, but are visiting for their own purposes. These champions sometimes clash with each other, roughly reflected in the gameplay of League of Legends.
▶ Watch the 2020 Season Cinematic Movie 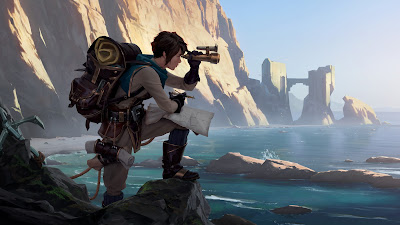 The setting has gone through two phases: the "original" setting that was canon from 2009–2014, and the rebooted setting from 2014–present. The original setting was very focused on justifying the exact mechanics of a game of League in the world of Runeterra. The MOBA predecessor to League, Defense of the Ancients, featured two warring sides with two separate hero rosters; however, in League, any combination of champions was legal to create a team. To explain this, in the original setting, Valoran was functionally ruled by extremely powerful time mages who could intimidate the other nations into compliance with their whims. They created the "Institute of War", also known as the "League of Legends", to resolve disputes and act as something like an international sports league. In these disputes, "Summoners" (a.k.a. the game player) could control any of Runeterra's greatest heroes or villains in their struggles, thus justifying why a team of 5 characters who all hated each other might form. Additionally, these time mages would actually power-down the characters to "level 1" before each match to make things 'fair'; some character's backstories even involved them explicitly having their powers sealed by the Institute of War due to them being too powerful otherwise, such as the demigoddesses Kayle and Morgana. This explained why characters might participate in multiple matches and have to relearn the same skills each time. After a match, a "Judgment" would sometimes be handed down, with the winning Summoners able to give land and privileges to those they favored. 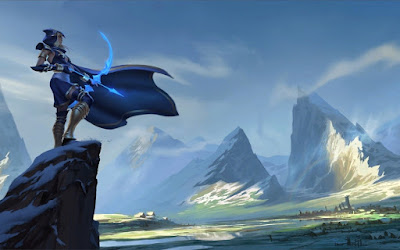 The narrative team at Riot eventually decided this setup was too constraining, and "rebooted" the story behind League of Legends in 2014. In essence, the original story put too much emphasis on the faceless player stand-in Summoners and the Time Mages of the Institute; "the very idea of all-powerful Summoners made Champions little more than puppets manipulated by godlike powers." Any interesting champions the Narrative team created were rendered as secondary, mere servants to the Summoners, unable to influence their own destiny. Many champion's lore did not give them reason to join the Institute, such as serial killer fire spirit Brand or void monster Rek'Sai. Riot wished to let champions take the center stage and have stories of their own, pursuing their own unique goals. For example, Riot has since released a plotline about a lost empire in the Shurima desert and a plotline about a clash between the pirate Gangplank and the pirate-hunter Miss Fortune in the city of Bilgewater, both of which were driven by the champions of League of Legends, not Summoners. Riot compared this style of narrative to comic book characters and classic literature, where interesting characters can have many adventures over time and not necessarily have all of them make sense in the same continuity. A side effect of this is "that the game and story aren’t one-to-one copies of each other." 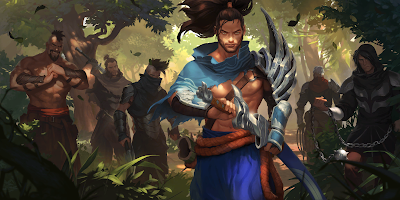 The world of Runeterra consists of a number of countries and city-states, locked in a web of rivalry, alliance, and conflict. The two largest and most powerful entities are the states of Demacia and Noxus, who have fought wars in the past, and are in a Cold War-esque state currently, with each seeking to quietly undermine the other. Demacia is inspired by an idealized Medieval European kingdom, while Noxus is reminiscent of the Roman Empire. Demacian champions tend to value themes like chivalry and honor, while Noxus prides itself on vision, might, and guile. Piltover and Zaun are a city-state at the forefront of technology; Piltover, the "respectable" half of the city, has a "steampunk" style, while Zaun, the neglected undercity of Piltover, is a darker vision of the power of technology, engaging in ethically questionable research. The Freljord is an icy domain riven by a three-way civil war between rival claimant Queens Ashe, Sejuani, and Lissandra. Bandle City is a peaceful domain of yordles, a race of small humanoids unique to League of Legends. Ionia is an island nation with a strong connection to magic and features champions inspired by monk and ninja archetypes, as well the Vastaya, a race of animal-human hybrid creatures also unique to League of Legends. Bilgewater is a port town with a pirate theme. The Shadow Isles is an island chain that was magically corrupted, and has become haunted by a malign force known as the "Black Mist" which leeches life and empowers the undead. Targon is an ancient mountain peak with a Greek mythology theme. Shurima is a recently resurrected empire that was until recently lost to the desert, with a somewhat Egyptian theme. Icathia is another fallen and abandoned city where Void monsters from another dimension have crossed into Runeterra, with a Lovecraftian theme. 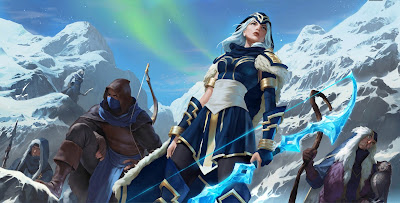 Of the current maps, Summoner's Rift is set at the Institute of War from the 'original' League storyline; the Twisted Treeline is set in the Shadow Isles; and the Howling Abyss map is set in the Freljord. 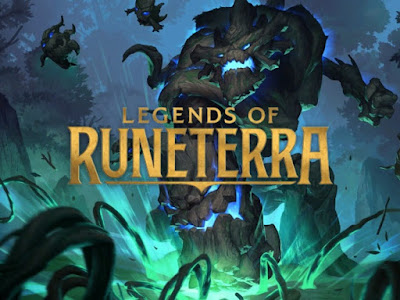