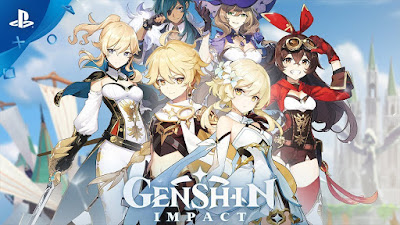 G E N S H I N   I M P A C T
After playing Genshin Impact's final beta for 20+ hours, questing through the story, trying out the co-op, rolling for characters in the gacha and more, here are our overall thoughts/impressions.
▶ Watch the Video
In a world called Teyvat, certain individuals chosen by the gods are given a Vision — magical gemstones that give their bearers the ability to control an element. The player starts out as a Traveler of unknown origin who is searching for a lost sibling. The player can choose between a male or a female version of the Traveler. As the adventure progresses, the player controls several other characters met by the Traveler on their journey, each with unique personalities and special abilities, as they undertake quests to understand the truth about the primordial gods of this world.
Posted by anim8trix at 12:00 AM