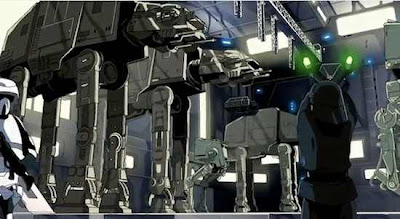 Here's an awesome concept video of a Star Wars battle in space, created in vintage, '80s Star Blazers glory. It's two rousing minutes of Rebels vs. the Empire, Japanese-style. This spirited fan-film was crafted by British YouTube wizard OtaKing77077 and it cuts straight to the iconic core of Star Wars' universal appeal with elegant camera angles and bold imagery. This dogfight is inspired by classic anime shows like Space Battleship Yamato and the original Gundam series. See the sad fate of a doomed Rebel Blockade Runner under assault by a ruthless Star Destroyer in full attack mode and pray George Lucas may be watching to grant this cool project a future greenlight.
Posted by anim8trix at 12:06 AM