The Wolf Children Ame and Yuki

To be Screened at Hawaii Int'l Film Fest 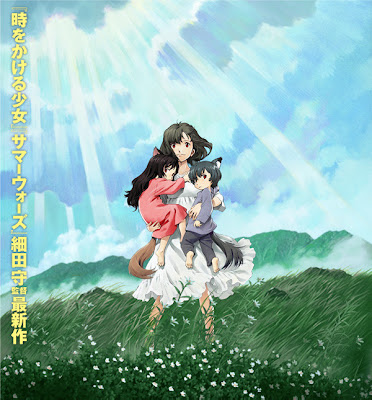 [Source: AnimeNewsNetwork.com] The Hawaii International Film Festival has announced that it will screen Mamoru Hosoda's The Wolf Children Ame and Yuki anime film on October 17 at 9:00 p.m. and October 21 at 12:30p.m.

The Wolf Children Ame and Yuki is the latest film by the director of Summer Wars and The Girl Who Leapt Through Time. The film's story covers 13 years and begins with a 19-year-old college student named Hana who encounters and falls in "fairy tale-like" love with a "wolf man." After marrying the wolf man, Hana gives birth and raises two Wolf Children — an older sister named Yuki ("snow") who was born on a snowy day, and a younger brother named Ame ("rain") who was born on a rainy day. When the wolf man suddenly dies, Hana decides to move to a rural town far removed from the city. The film opened in Japan on July 21 and held its world premiere in Paris in June.
Posted by anim8trix at 12:04 AM