From the animation company that
brought us Legend of Korra... 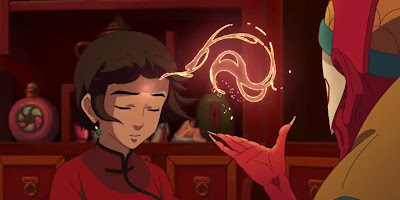 Directors Liang Xuan and Zhang Chun have been developing this ambitious anime fairy tale for over a decade via crowdfunding and their self-owned studio, B&T. Studio Mir became attached to the lyrical film, once titled Da Hai,  in 2014, and now it's destined for a wide Chinese release on July 8, 2016.

It is a world within our world, yet unseen by any human, and the beings here control time and tide and the changing of the seasons. On the day Chun turns sixteen, she is transformed into a dolphin to explore the human world. She is rescued from a vortex by a human boy at the cost of his own life. Chun is so moved by the boy's kindness and courage that she decides to give him life again. But to do this, she must protect the boy's soul, a tiny fish, and nurture it to grow. Through adventure and sacrifice, love grows, yet now she must release him back to the sea, back to life in the human world.

Hopefully the date for an American premiere will be announced soon!
Posted by anim8trix at 12:00 AM