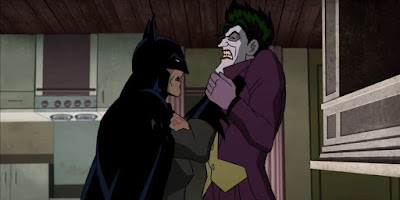 T H E   K I L L I N G   J O K E
[Source: blastr] It’s been a long time coming, but an animated feature-film adaptation of the iconic (and brutal) Batman: The Killing Joke comic is finally in the works. Want to see how it’s shaping up?

The first teaser trailer has been released, which is basically your worst DC nightmare brought to life. Stylistically, this one looks in line with what fans have come to expect from the existing run of DC animated films — it’s clean and looks to be on the right track. Though, for a story this famous, you wonder if they might’ve wanted to make a bit more effort to mimic the art style from the graphic novel. A minor quibble, but still.

The scenes shows here look to be a beat-by-beat adaptation of the comic story, with all the creepy and unsettling visuals you’d think would be there. This is going to be a hard movie to watch. No doubt. Throw in the fact that Mark Hamill’s Joker is beyond terrifying, and yeah. Creepy. Kevin Conroy's Batman will certainly have his hands full.

Along with the first teaser, an extended featurette about the project can be viewed below.