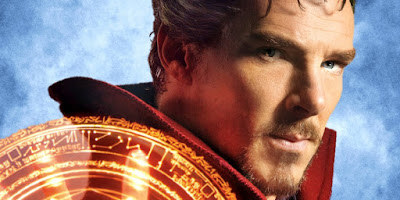 D O C T O R   S T R A N G E
[Source: ScreenRant] Following the trend established during Phase Two of the Marvel Cinematic Universe, there are not one but two Marvel Studio films releasing this year. The first is the vigorously hyped Captain America: Civil War, in which opposing factions led by Iron Man and Captain America will square off. The second is Doctor Strange, a film that will establish the more mystical side of the MCU – an area where many of Marvel’s current cinematic roster would be found wildly out of their element.

Since unveiling our first look at Benedict Cumberbatch in his full Doctor Strange attire (looking as he had stepped straight off the comic book page) a smattering of set photos and videos have appeared online, giving an even better impression of how Cumberbatch will embody the role of Marvel’s Sorcerer Supreme. As filming continues this weekend in London (standing in for NYC), more photos have cropped up which feature not only Cumberbatch but also his Doctor Strange co-star Chiwetel Ejiofor (playing Baron Mordo).

Take a look below at a handful of set photos depicting Strange and Mordo suited up and ready for battle. 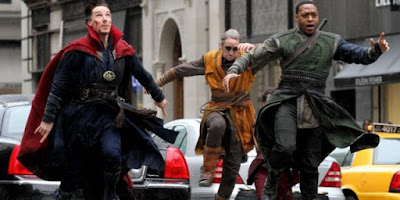 In the past Marvel Studios has never shied away from their characters having bright and colorful costumes, but it’s undeniable how downright “comic-booky” Cumberbatch and Ejiofor appear. Yet, there’s sense of weight and structure to these robes, which certainly lends a bit of realism and will hopefully counteract them appearing too costume-y. Still, some of the poses caught on camera – and in particular these actions shots courtesy of Just Jared – give Doctor Strange something of a Power Rangers-vibe – especially the images that show Cumberbatch and Ejiofor joined by other students of the Ancient One, coming together to wield their magics and battle evil.

However, for as silly as these actors may appear now, sporting colorful wizard robes while dramatically pointing and posing their hands, once the visual effects work is added these scenes will surely come across as epic as intended. Fans already got a bit of taste of how magic is conjured in the MCU with Scarlet Witch in Age of Ultron, but Doctor Strange will depict characters displaying a multitude of magical powers. MCU guru Kevin Feige has already revealed that Strange himself will have variety of abilities, from casting spells to opening portals. He can also fly thanks to his Cloak of Levitation, which is possibly what we see being filmed in those photos that snapped Cumberbatch in mid-leap. 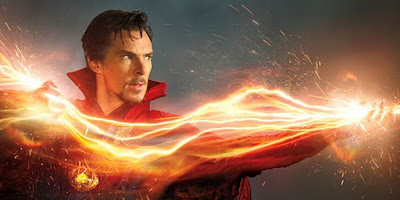