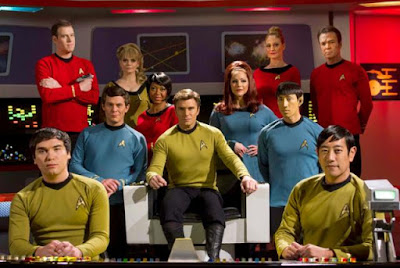 STAR TREK CONTINUES
"Star Trek Continues" is exactly what it sounds like: A fan-made science fiction series that picks up where the original "Star Trek" TV show left off, putting Kirk, Spock and the rest of the starship Enterprise's crew through a whole new set of adventures in the final frontier. The cast — made up of of talented voice- and stage-actor Trek fans, including Vic Mignogna as executive producer (and Kirk) — works on an exact-replica set, evoking the original show's performances to create what feels like lost episodes from the series itself.
Read more here.
Posted by anim8trix at 12:00 AM