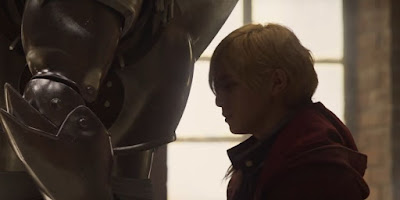 FULLMETAL ALCHEMIST MOVIE
[Source: blastr] Directed by Fumihiko Sori (Ping Pong, Ashita no Joe), the movie stars Ryosuke Yamada (Assassination Classroom) as Edward Elric and will feature a CGI Alphonse Elric (Edward’s little bro) in full-body armor. Although the 30 second trailer doesn’t reveal too much of the movie yet, we do get our first look at Edward and a cool sneak peek at Alphonse's armor.

The movie filmed in Italy with a full Japanese cast (the story is set in a fictional world influenced by the European Industrial Revolution) is slated to open in Japan in the winter of 2017 (not sure when or if it will hit North America yet) and will apparently tell the whole story in one movie. We’re also told the character of Edward is being aged up from 15 in the manga to 20 years old in the movie.

Here’s a brief description of the Fullmetal Alchemist story via Anime News Network:

In an alchemical ritual gone wrong, Edward Elric lost his arm and his leg, and his brother Alphonse became nothing but a soul in a suit of armor. Equipped with mechanical “auto-mail” limbs, Edward becomes a state alchemist, seeking the one thing that can restore his and his brother's bodies...the legendary Philosopher's Stone.