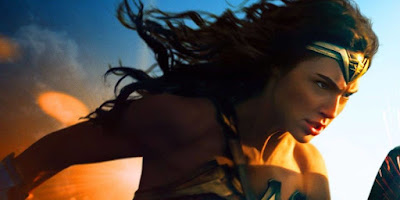 The full trailer boasts a lot of exciting new footage, including a sneak peek at Diana’s idyllic life on the Isle of Themyscira, before Steve Trevor (Chris Pine) arrives on the shores of Paradise Island, bringing with him the Great War. There’s much to see and a lot more to digest in the trailer below -- including the fact that one of the villains (the woman in the mask) appears to be Doctor Poison (uncomfirmed as of yet), a classic Wonder Woman villain who was a member of a supervillain team called Villainy Inc. -- but what I’m seeing so far is making me very excited about the upcoming comic book movie. Although I may be a tiny bit biased, because Wonder Woman was my favorite childhood female superhero.

Before she was Wonder Woman, she was Diana, princess of the Amazons, trained to be an unconquerable warrior. Raised on a sheltered island paradise, when an American pilot crashes on their shores and tells of a massive conflict raging in the outside world, Diana leaves her home, convinced she can stop the threat. Fighting alongside man in a war to end all wars, Diana will discover her full powers...and her true destiny.