Live-Action Ghost in the Shell Featurette 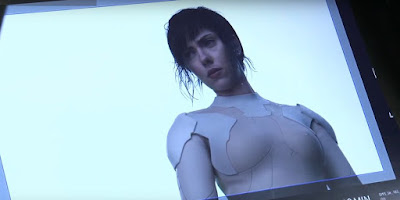 GHOST IN THE SHELL
[Source: blastr] The featurette boasts video interviews with director Rupert Sanders (Snow White and the Huntsman), executive producer Michael Costigan (Prometheus) and Scarlett Johansson, who plays the role of Section 9 leader Major Motoko Kusanagi, aka The Major. What’s more, original Ghost in the Shell anime director Mamoru Oshii — who popped up for a set visit — gives his blessing to the movie, saying Scarlett Johansson’s performance as Motoko has gone “above and beyond” and calling the movie “the most gorgeous film in the series so far.” That’s some pretty high praise right there.

Also starring in Ghost in the Shell is Pilou Asbæk (Game of Thrones) as Motoko Kusanagi’s (The Major) right-hand man Batou, Beat Takeshi Kitano (Zatoichi) as Lt. Col. Daisuke Aramaki, and Michael Pitt (Boardwalk Empire) as the villain of the piece, The Laughing Man. Chin Han, Danusia Samal, Lasarus Ratuere, Yutaka Izumihara and Tuwanda Manyimo round out the cast as members of Section 9, while French star Juliette Binoche plays Dr. Ouelet. Michael Wincott (The Crow, Wesworld) will also appear in an undisclosed role.

Based on the internationally-acclaimed sci-fi property, Ghost in the Shell follows the Major, a special ops, one-of-a-kind human-cyborg hybrid, who leads the elite task force Section 9. Devoted to stopping the most dangerous criminals and extremists, Section 9 is faced with an enemy whose singular goal is to wipe out Hanka Robotic’s advancements in cyber technology.

Ghost in the Shell is based on the cyberpunk anime and manga series created in 1989 by Masamune Shirow and will open on March 31, 2017.
Posted by anim8trix at 12:00 AM