Just what is ‘Justice League Action’?

JUSTICE LEAGUE ACTION
Batman, Superman and Wonder Woman lead the DC Comics Super Heroes against their most infamous foes in adventures packed with relentless thrills, fun and action. No need to wait for the good stuff to start, each eleven-minute episode jumps in with lightning-paced action and heroics. Whether defending the Earth, facing invaders from space, or battling the bizarre forces of magic, the always-rotating team of Justice League heroes, are up to any challenge. 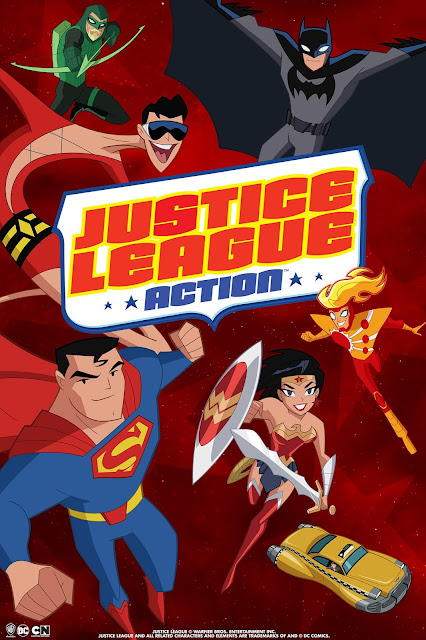 [Source: Collider] Nothing will ever compare to the Justice League and Justice League Unlimited animated series. But, fans were geeking out over the prospect of another cartoon coming to Cartoon Network starring DC’s pantheon of superheroes, Justice League Action. We’ve already seen some footage and heard some details from the network, but if you were expecting something more aligned with Unlimited, a batch of new clips have been unearthed to prove otherwise.
Comic Book Resources discovered some clips of Action from the YouTube channel Things I Like, and they illustrate a much more cartoony version than some of us may have been hoping for. It’s more Teen Titans Go! than Justice League Unlimited, based on the animation, the humor, and the fact that Khary Payton (King Ezekiel on The Walking Dead) reprises his voice role of Cyborg from Teen Titans Go!

There will still be tons of action, as we spotted in the trailer from Comic-Con.

The clips showcase a number of characters, including Batman, Superman, The Flash, Joker, Mongul, Toyman, Blue Beetle, and Chronos. In one, we see the heroes trying to save the Clown Prince of Gotham from Mongul before he’s thrown into outer space, while another features the team under the thrall of Toyman, as he forces them to perform a dance routine. Then there’s a face-off with Batman and Blue Beetle battling the time-manipulating Chronos after an encounter with crime boss Carmine Falcone.

Justice League Action will debut on November 27th with 11-minute installments. Watch the new clips below.