The Original Sarah Connor Returns to Face the Terminators
[Source: Syfy] It's been 27 years since Terminator 2: Judgment Day opened in cinemas and became the highest grossing film of its year. James Cameron's sequel to The Terminator also presented a landmark in CGI and visual effects that influenced a whole generation of action and sci-fi film. The Terminator franchise continues to this day, with a sequel-slash-reboot of the series arriving next year. Returning to the fold for the first time since T2 is Sarah Connor as played by the iconic Linda Hamilton. A promotional image for the movie revealed Hamilton back in action mode with aviator sunglasses, a shotgun and look of utter fierceness, and we couldn't be more excited for her return. Others have played Sarah Connor since, but nobody has nailed her prickly drive or forcefulness quite like Hamilton.

With Hamilton back as Sarah Connor in what will officially be the sixth Terminator film, audiences have been given another chance to embrace one of pop culture’s great heroes. Hamilton is now 61 and by merit of her age, she continues to push boundaries. In that promotional image, she is clearly an older woman, with greying hair and lines on her face, but that doesn’t soften her sharp edges or power. Hamilton gets to look her age and that’s incredibly exciting for an action hero. Indeed, it’s exciting for women in film as a whole, if only because we’ve been banned from publicly aging. Even the grandmother parts must remain impeccably glamorous, which isn’t bad but can be so limiting for everyone involved. Here, Hamilton is powerful and in charge and mature.

There’s been a boon in recent years of older actors having a career renaissance thanks to action films. Liam Neeson went from prestige actor to legendary action man in his 60s, thanks to the success of the Taken franchise and similar films. Keanu Reeves has never been more exciting or vibrant than he is as John Wick. Tom Cruise hasn’t slowed down since his 30s, but there’s still something kind of amazing about seeing a 56-year-old man hanging off the sides of buildings in Mission: Impossible movies. This is an honor that hasn’t been bestowed upon many actresses these days. Even Helen Mirren didn’t get to join in on the action when she joined the Fast and the Furious franchise, despite our strongest desires. There’s a major gap in the market for women like Hamilton to fill as older action heroines at the front and center of the drama. And clearly, there’s a hunger for it from audiences.

Hamilton is one of three women in that new promotional Terminator image, alongside Mackenzie Davis and Natalia Reyes. All three look powerful, like leaders and heroes, and there's not a man in sight. Hamilton carved the path forward, and now she gets to lead the way for generations past and present. It's good to see her back. 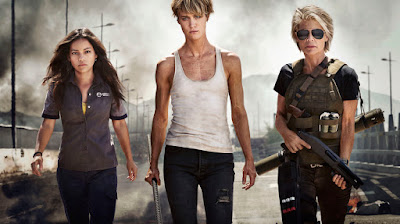