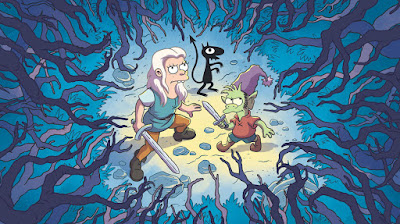 Matt Groening's "Disenchantment"
Trailer at San Diego Comic-Con panel
Fans at San Diego Comic-Con Saturday were treated to a sneak peek behind the magic of Matt Groening's upcoming fantasy animated series Disenchantment. The Netflix's upcoming show from the The Simpsons creator takes place in the medieval kingdom Dreamland, and centers on the adventures of princess Bean, the elf Elfo, and the demon Luci. At the panel, attendees were treated to a new trailer to kick things off, before hearing from those involved about what we can expect when the show premieres in August.

Groening was joined by showrunner Josh Weinstein and voice actors Eric Andre (Luci) and Nat Faxon (Elfo), who discussed the setting and the trio of Luci, Elfo, and Princess Bean. Then most of the cast of Futurama (John DiMaggio, Billy West, Maurice LaMarche, Tress MacNeille, and David Herman) were brought on stage, reuniting to provide various voices for the new series.


On why they decided to go fantasy with Disenchantment, Groening said he’s been a fan of the genre since he was a kid. “This show is basically us trying to see if we can create a new universe and play with it,” Groening said.

The show is the first time they’re trying to tell a serialized story as well, Weinstein pointed out. While each episode can stand on its own, they are telling an epic story, and there will be easter eggs as well as hints starting in the very first episode offering clues to the mystery in the series and the show’s ultimate end.

The voice actors each offered some insight into the characters they’ll be playing in the series, and spoke about how fun it is to be recording together. Faxon said the energy of being together really makes it a great atmosphere for what they’re trying to create.

One voice actor who couldn’t make the panel was Abbi Jacobson, who plays the lead character, Princess Bean. When asked about creating a show with a female lead for the first time, Weinstein said that the range of princesses in media tends to go from Disney princess level to princesses who are just badass, and for them they wanted to create a realistic portrayal of a woman going through this situation in a kingdom.

Claudia Katz, vice president of Rough Draft Studios, also joined the panel to speak about the animation process and how they wanted to take it to the next level, which perfectly fit with how Groening described the show earlier in the discussion as being “so visually rich it makes Futurama look like The Simpsons.”

The packed room was definitely excited for the series, cheering at the new clips they were shown and hints of voices the actors provided. Knowing Groening's other work, it will be interesting to see what he does in this fantasy realm with the streaming service when the show premieres August 17.
Posted by anim8trix at 12:00 AM