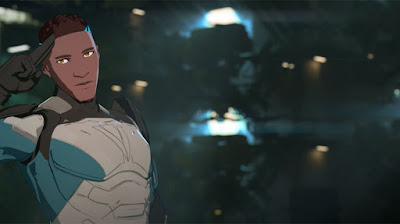 gen:LOCK teaser trailer features
Doctor Who's David Tennant in action
[Source: Syfy] t's already been reported that Doctor Who's David Tennant will be lending his vocal stylings to the new Rooster Teeth mecha sci-fi series gen:LOCK, but now, thanks to a newly released teaser trailer from the Austin-based company, we have our first official listen to Tennant in the previously teased role of Dr. Rufus Weller (aka "Doc"), the inventor of the technology that features in the show's name.

Tennant joins the previously announced voice cast for the series, including Michael B. Jordan (Black Panther) — who is also producing gen:LOCK through his company, Outlier Society Productions — as lead Julian Chase; Dakota Fanning (Coraline) as pilot and Chase's love interest Miranda Worth; and Koichi Yamadera (Cowboy Bebop, Ghost in the Shell) as recruit Kazu Iida.

gen:LOCK, part of the next phase of Rooster Teeth's planned animation slate, will revolve around a diverse group of young pilots tasked with operating giant, mechanized robots as part of a fight against class warfare. The story takes place in a dystopian, futuristic version of Earth.


Check out the first trailer released by Rooster Teeth above, which features Tennant in the role of Doc and a new character named Colonel Raquel Marin, voiced by actress Monica Rial (RWBY, Fullmetal Alchemist). From what we can garner, Tennant's Doc has a promising new pilot initiate to train, known as Yasamin Madrani. Unfortunately, it may be a little easier said than done to secure her, as Colonel Marin doesn't feel too inclined to spring the newest recruit free from the Mesa Detainment Center.

What will happen when Madrani and Chase ultimately cross paths? We'll have to find out when gen:LOCK premieres in January 2019, with a planned eight-episode first season.
Posted by anim8trix at 12:00 AM