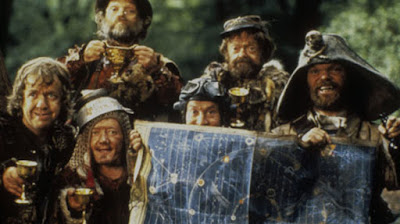 Terry Gilliam's Time Bandits to
become Apple original TV series
[Source: Syfy] So, it appears that Terry Gilliam wasn't just blowing smoke about making a Time Bandits TV series all those many years ago. Apple is looking to adapt the director's 1981 sci-fi fantasy film into a series, Deadline is reporting. The show will be developed by Anonymous Content, Paramount Television and Media Rights Capital.
Time Bandits follows the adventures of 11-year-old Kevin, who one night encounters six time-traveling dwarves who emerge from his bedroom closet and wisk him away on their adventures through time. And of course, what do these men do with their time traveling abilities? Rob historical figures blind, of course!

For the Time Bandits series, Gilliam himself will be a non-writing executive producer alongside Anonymous Content and MRC.

Apple's streaming TV service is clearly eager to get on board the original sci-fi, horror, and fantasy programming train that HBO, Hulu and Amazon have been on. It was announced in April that the technology giant ordered a TV series based on Isaac Asimov’s Foundation trilogy. Apple is also planning to relaunch Steven Spielberg's classic 1980s sci-fi anthology series Amazing Stories and developing a sci-fi series with Battlestar Galactica's Ronald D. Moore and an "epic, world-building drama set in the future" called See starring Jason Momoa.
Posted by anim8trix at 12:00 AM