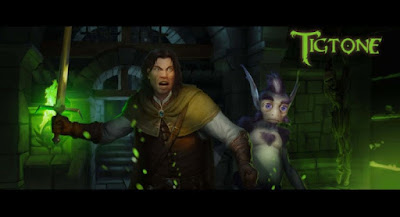 T I G T O N E
Tigtone is a 15-minute medieval project from Andrew Koehler and Benjamin Martin, based on their 2014 short The Begun of Tigtone. Focusing on a quest-obssessed hero, Tigtone will combine "highly rendered, hand-painted fantasy art, motion capture performance, 2D animation, and pseudo-3D visual effects," thanks to the folks at Titmouse. The series is meant as a satire of fantasy tropes that one would find in role-playing games, video games, and movies. Blake Anderson (Workaholics) serves as producer and will also lend his voice to the cast.
Posted by anim8trix at 12:00 AM