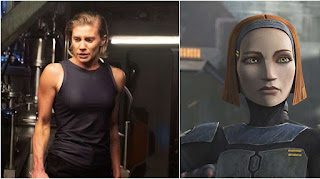 The Mandalorian Gets Battlestar Galactica's
Katee Sackhoff to star as Bo-Katan Kryze
[Source: Syfy] First Ahsoka Tano, now Bo-Katan Kryze. The animated women of the Star Wars universe are turning out in full force for the second season of The Mandalorian. It was big news when the first live-action Star Wars show added Rosario Dawson to its cast as the legendary Padawan of Anakin Skywalker, but now there's another face well-known to genre fans joining the fray — this time reprising a character she brought to life on Star Wars: The Clone Wars.
Katee Sackhoff, whom some fans will know from her work as Starbuck on Battlestar Galactica, is reprising her role as Bo-Katan Kryze from both Clone Wars and Star Wars Rebels. The only difference this time around is that she won't just be lending her voice to the one-time leader of Mandalore. She'll be playing her in her entirety. Slashfilm reports that the Mandalorian warrior (who once served under Mandalorian showrunner Jon Favreau's Pre Vizsla in the Death Watch) that gets her hands on the legendary Darksaber will be turning up in Season 2 after filming her role in February, before coronavirus pandemic precautions led to production shutdowns.

Basically the instigator behind the Siege of Mandalore that was so essential to the plot of the recently-ended Clone Wars series from Dave Filoni, Kryze likely has a bone to pick with Moff Gideon, who was revealed to have the Darksaber during The Mandalorian's Season 1 finale. Whatever her story may be in the series, it's almost certainly linked to this weapon and Gideon's possession of it.

How Boba Fett and Ahsoka Tano tie into all this alongside Pedro Pascal's Din Djarin and Baby Yoda...well, that's another story entirely. However, fans wanting to get a good grasp on the breadth of The Mandalorian's plotting should probably start doing their Filoni homework by binging his animated Star Wars shows in the following months.

The Mandalorian will return to reward fans' homework diligence in October.