PARAMOUNT: A Tribute to Makoto Shinkai 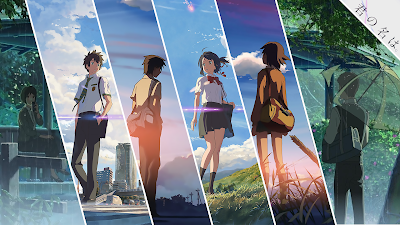 Anime Tribute to Director Makoto Shinkai
A native of Nagano Prefecture, Makoto Shinkai studied Japanese literature at Chuo University, where he was a member of the juvenile literature club and drew picture books. He traces his passion for creation to the manga, anime, and novels he was exposed to in middle school. His favorite anime films are Laputa: Castle in the Sky, Nausicaä, and The Castle of Cagliostro by Hayao Miyazaki, The End of Evangelion by Hideaki Anno and Patlabor 2 by Mamoru Oshii. Shinkai has been called "The New Miyazaki" in several reviews, including those by Anime Advocates and ActiveAnime—comparisons he calls an "overestimation". He is married to retired actress and producer Chieko Misaka, star of films including Versus by Ryuhei Kitamura; they have a daughter, child actress Chise Niitsu (born 2010). Asteroid 55222 Makotoshinkai is named after him.
▶ Watch the Anime Tribute
Posted by anim8trix at 12:00 AM