[Source: Syfy] San Diego Comic-Con will indeed go on as scheduled this summer — from the comfort of your living room.

After initially scrapping the 51-year-old convention for the first time in its history due to coronavirus concerns, organizers of the granddaddy of all cons have announced that they're putting on a virtual edition that will enable convention goers to cosplay all they want on their cozy couches at home.

No doubt regular attendees will appreciate not having to stand in line for hours on end to cram into Hall H. The legendary room has become a hotbed for Hollywood studios teasing their biggest superhero tentpoles, not to mention a go-to source for breaking entertainment news.

A virtual version of the fan-favorite con is clearly better than nothing, though it's still unclear exactly what that looks like, or even whether it's taking place on the previously scheduled dates of July 23-26. Nor do we know what Hollywood and comic book talent will be zooming in to participate.

A rep for Comic-Con wasn't immediately available for comment.

Still, this is welcomed news, seeing as it wasn't a certainty that an online SDCC confab would even happen at all when organizers confirmed they were calling things off back in mid-April due to the spread of COVID-19.

"Extraordinary times require extraordinary measures, and while we are saddened to take this action, we know it is the right decision,” Comic-Con spokesman David Glanzer said at the time.

That announcement, which came in the wake of a string of other cancellations, including WonderCon Anaheim and SXSW, also noted that Comic-Con would be rescheduled for July 22-25, 2021. Presumably that date will still stand next year.

While others attempted to put together other cyber events, such as last month's HomeCon, the lone major live-action convention holdout is Disney's Star Wars Celebration 2020, which as of press time is still scheduled to go on in August. 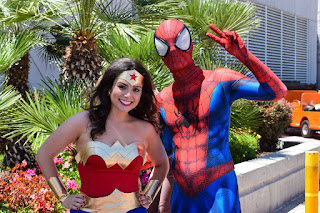