Ahsoka Tano Behind the Scenes of Mandalorian

- - A H S O K A   T A N O - -
The Mandalorian season 2 brought fan-favorite Ahsoka Tano to the live-action universe, but that won’t be the last time we see Rosario Dawson as Star Wars’ most famous Togruta Jedi. On Thursday, during the 2020 Investor Day call, Disney announced that Ahsoka will get her own live-action series on Disney Plus.

It seems the project is still a long way off so we didn’t get many details on the plot. One thing we do know is that the show is going to be set immediately after the events of Star Wars: Rebels, which means that it should all be before Ahsoka’s meeting with Din Djarin and Grogu. On top of that, this unknown period in Ahsoka’s life could serve as a great setting for us to learn more about the history of the Jedi order.

According to Disney’s announcement, the Ahsoka Tano series is set to debut sometime in 2022. 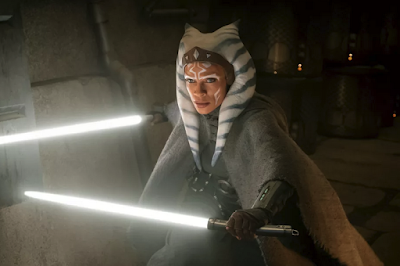