The History of Lupin The Third 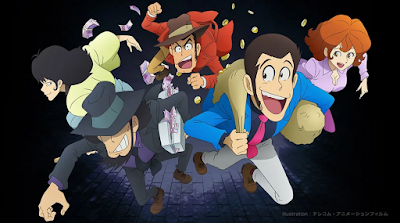 THE HISTORY OF LUPIN III
With the release of Lupin The Third The First, now is the perfect time to look back on the history..no!... the LEGACY of the gentleman thief and his loving creator, Money Punch.

The series was created in 1965 by Japanese manga artist Kazuhiko Katō under the pen name Monkey Punch. His inspiration for the series was the fictional French gentleman thief Arsène Lupin, created by Maurice Leblanc. Before creating the series he read 15 of Leblanc's stories. The aim of the Lupin III series was to produce a comedy adventure series that reflected the traits of Leblanc's character. Originally the intention was to keep the blood ties between the two fictional characters secret, however he was convinced by others not to do so.

Monkey Punch combined elements of Arsène Lupin with James Bond to develop the character of Lupin III and made him a "carefree fellow". Lupin was given a red color jacket which Monkey Punch believes is a flashy, sexy color. As the series was to be published in a magazine targeted at adults, Fujiko Mine was created to add a female presence and to fulfill a "Bond girl" role. Her name was inspired by a picture of Mount Fuji, Monkey Punch added the -ko female suffix to create her first name, and chose "Mine" for her family name because of its meaning as "summit". At the beginning of the series, many of the women Lupin encounters are all named Fujiko, but are treated as different characters from chapter to chapter. Creating a new female character each week was too difficult for Monkey Punch so she evolved into a single character who changes style frequently. Jigen was based on James Coburn, especially his role in The Magnificent Seven, and his name was chosen to reflect his unconventional personality. Goemon was created to give an oriental element into an otherwise western series. Despite Lupin and Goemon originally being enemies, Monkey Punch decided that they were on the same wavelength. While Lupin, Fujiko, Jigen and Goemon frequently operate together for their own goals, the author considers them not to be a true group as they have their own individual interests. In the manga they operated individually, however in the anime adaptations the group tend to work together. Inspector Zenigata was conceived as Lupin's archrival to create a "human Tom and Jerry".

When Monkey Punch began Lupin III, he was already working on another series, Pinky Punky. Monkey Punch enjoys writing outlaw characters, and both Lupin III and Pinky Punky made use of outlaws as central characters. According to him, this made it easy for him to write two series without much pressure. Monkey Punch enjoys puzzles and mysteries such as Columbo and Agatha Christie novels, and was also inspired by The Three Musketeers and the movies of Alfred Hitchcock. He believes the characters of Lupin and Fujiko are similar to the characters of D'Artagnan and Milady de Winter, and describes them as "Not necessarily lovers, not necessarily husband and wife, but more just having fun as man and woman with each other". Another influence on the manga was Mad magazine. Monkey Punch said the appeal of drawing Lupin comes from the character being able to go anywhere without obstacles and being able to do whatever he wants, whenever he wants. However, this is contrasted by the appeal of Zenigata's strict personality. Originally the series was only expected to last three months, but due to its popularity, Monkey Punch continued to draw it. However, despite his happiness at its success, he has expressed confusion over its popularity.

Monkey Punch has said that he believes the story can never end but that if he had to, both Zenigata and Lupin would have to end as equals. They would either both fail, both win or both get very old.
▶ Watch the Video
Posted by anim8trix at 12:00 AM