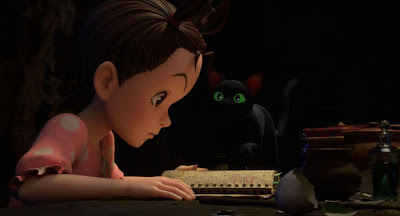 Studio Ghibli’s First CG Feature,
‘Earwig and the Witch,’ Gets
English-Language Oscar Qualification“
Earwig and the Witch,” the first CG-animated feature from Studio Ghibli, directed by Goro Miyazaki (“From Up on Poppy Hill,” “Tales from Earthsea”) — and son of legendary Hayao Miyazaki — will get an English-language release for Oscar qualification from GKIDS. The feature is slated to air on NHK in Japan December 30, 2020. GKIDS will release the film theatrically in North America in early 2021.

The voice work is headlined by Oscar nominee Richard E. Grant (“Can You Ever Forgive Me?”), Kacey Musgraves (“Golden Hour”), and Dan Stevens (“Legion”). The six-time Grammy-winning Musgraves will also record an English version of the theme song, “Don’t Disturb Me.”

Based on the children’s novel “Earwig and the Witch” by Diana Wynne Jones, the fantasy concerns the young Earwig (Taylor Paige Henderson) growing up in a British orphanage in the countryside with no idea that her mother (Musgraves) possessed magical powers. Her life changes suddenly she’s forced to live with a selfish witch, Bella Yaga (Vanessa Marshall), and her associate, The Mandrake (Grant). As the headstrong young girl sets out to uncover the secrets of her new guardians, she discovers a world of spells and potions, and a mysterious song that holds the key to unlocking her family’s secret identity.

“Earwig and the Witch” obviously represents uncharted territory for the hand-drawn studio. In fact, at a press conference earlier this year, Miyazaki said that he was on his own with a young staff because of his previous expertise in CG with the anime series “Ronja, The Robber’s Daughter.” As for the heroine, he added that she marks a Ghibli departure because “she’s a strong girl who does every conceivable thing to live how she wants to live.”
▶ Watch the Trailer
Posted by anim8trix at 12:00 AM