Santa Claus Is Comin' to Town - The Full Movie

Santa Claus is Comin' to Town
Special Delivery "S.D." Kluger is introduced after a newsreel prologue, telling the viewer how children around the world are preparing for the arrival of Santa Claus. When his mail truck breaks down, he tells the story of Santa Claus by answering the children's letters to Santa.

The story begins in the gloomy city of Sombertown, ruled by the ill-tempered Burgermeister Meisterburger. A baby arrives on his doorstep with a name tag reading "Claus" and note requesting that the Burgermeister raise the child. He then orders his lawkeeper Grimsley to take the baby to the "Orphan Asylum". On the way there, a gust of wind blows both sled and baby to the mountain of the Whispering Winds, where the animals hide him from the Winter Warlock and convey him to a family of Christmas Elves by the name of Kringle. Led by their matron, Tanta Kringle, the family adopts the baby and names him “Kris”. A few years later, Kris hopes to restore the Kringle family as "The First Toymakers to the King".

When Kris is old enough, he volunteers to deliver the elves' toys to Sombertown. Meanwhile, the Burgermeister has banned all toys in the town and declares that anyone found possessing a toy will be arrested. On his way to Sombertown, Kris meets a lost penguin whom he names Topper. In the town, he offers toys to two children washing their stockings by a water fountain. He is stopped by Miss Jessica, their lovely schoolteacher, but she softens toward Kris when he offers her a china doll as a "peace offering". As Kris gives out more toys, the Burgermeister arrives, and Kris gives him a yo-yo. The Burgermeister at first happily plays with it, but when Grimsley reminds him that he is breaking his own law, the Burgermeister orders Kris captured.

As Kris and Topper return to the Kringles, the Winter Warlock captures them. But when Kris gives him a toy train as a present, the Warlock's evil exterior melts and he befriends Kris. To repay him, Winter reunites Kris with Jessica, who informs him that the Burgermeister has destroyed all the toys and the children now request new ones. To protect the town from further toy deliveries, the Burgermeister orders all doors and windows to be locked. But Kris enters by the chimneys and places toys in the children's hung stockings. The Burgermeister then sets a trap for Kris and Topper as he makes another delivery while his soldiers capture the Kringles and Winter. Jessica pleads with the Burgermeister to release her friends, but he refuses. Coming to the prison, Jessica asks Winter to break everyone out but he sadly refuses, having little magic left except some magic feed corn which enables reindeer to fly. With the reindeer's help, the group all escape. After months as an outlaw and discovery that their home was destroyed by the Burgermeister's guards, Kris grows a beard as a disguise. After Tanta suggests he return to his birth name "Claus" for safety, Kris marries Jessica. After the ceremony, the group travels to the North Pole to build their a castle and toy workshop. As the years pass and Kris and Jessica grow older, Kris travels only at night until the Meisterburgers have died off and Kris' legend goes worldwide. Having become Santa Claus, he is unable to fulfill all the toy requests throughout the year, and reserves his efforts for Christmas Eve.

At the end, S.D. Kluger suddenly realizes that it's getting late and remembers that he still has to deliver letters to Santa. He then drives off with Topper, Winter, the Kringles, and a parade of children as he sings "Santa Claus Is Coming to Town" during the credits. At the close, Santa steps out of his castle and waves to the viewers.
▶ Watch the Film 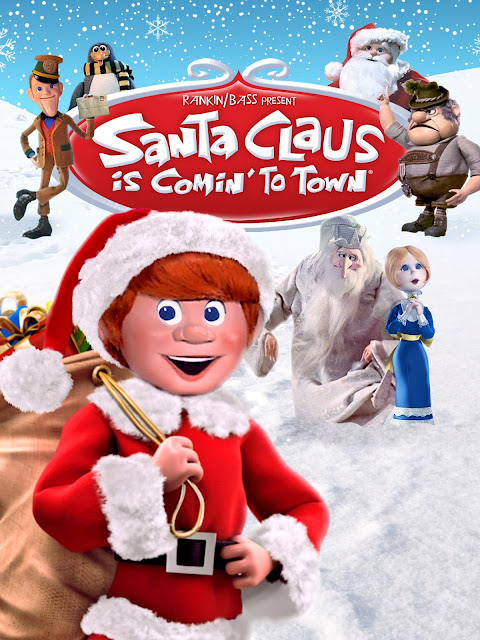