Kipo is an Underdeveloped Masterpiece 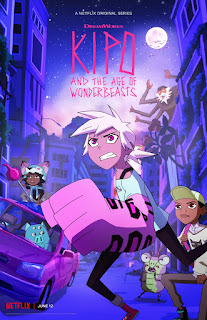 Kipo and the Age of Wonderbeasts
Season 1 Analysis
Exploring what Kipo and the Age of Wonderbeasts does right and what it can improve at as of Season 1. (Spoilers)
▶ Watch the Video
Kipo and the Age of Wonderbeasts is an American animated television series created by Radford Sechrist, adapted from his 2015 webcomic Kipo. The series is produced by DreamWorks Animation Television and animated by South Korean studio Mir. Its first season of ten episodes premiered on Netflix on January 14, 2020.
Kipo Oak, a thirteen-year-old girl, is searching for her father after being forced to flee from her underground city. To do so, she travels through an overgrown post-apocalyptic urban wasteland called "Las Vistas", ruled by sentient mutant animals ("mutes"), together with her new friends Wolf, Mandu, Benson and Dave. Sechrist compared the series to The Wizard of Oz, "but instead of ruby slippers [Kipo] has Converse on".
In the first season, Kipo is separated from her father Lio after their burrow is attacked by a monkey "mega mute". Traversing through the apocalyptic surface world of Las Vistas, she meets and befriends Wolf, a cold and hardened girl who has been surviving on her own after her adoptive wolf family turned on her, the upbeat Benson and his insect companion Dave, and the pig Mandu. Together, they set out to find the burrow Lio and the rest of Kipo's community fled to after their first one was destroyed. As the five travel along they make many mute allies and enemies, including the despot Scarlemagne, who rules over all the mute factions with an iron fist and intends to create a human army with his mind-controlling pheromones. Kipo also starts to experience strange physical mutations that give her mute-like abilities, which she uses to help her friends and herself against the various hostile mutes they encounter.