They're back to Save or Destroy the World AGAIN! 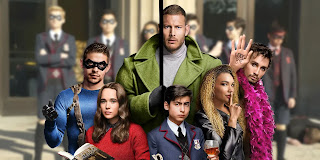 Same weird family. New weird problems.
The Umbrella Academy
The Second Season
Coming to NETFLIX on July 31
The Umbrella Academy is an American superhero web television series based on the comic book series of the same name published by Dark Horse Comics. Created for Netflix by Steve Blackman and developed by Jeremy Slater, it revolves around a dysfunctional family of adopted sibling superheroes who reunite to solve the mystery of their father's death and the threat of an impending apocalypse. The series is produced by Borderline Entertainment, Dark Horse Entertainment, and Universal Cable Productions. The ensemble cast features Ellen Page, Tom Hopper, David Castañeda, Emmy Raver-Lampman, Robert Sheehan, Aidan Gallagher, Cameron Britton, and Mary J. Blige. The adaptation began development as a film optioned by Universal Pictures in 2011. It was eventually shelved in favor of a television series in 2015, before being officially greenlit by Netflix in July 2017. The series is filmed in Toronto and Hamilton, Ontario.
▶ Watch the Trailer for Season 2
Posted by anim8trix at 12:00 AM