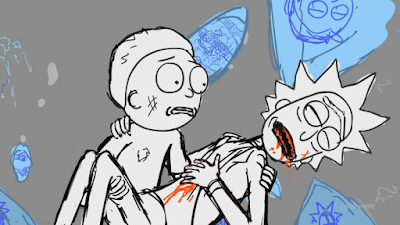 Rick and Morty return to cheat
Death in first Season 5 footage
[Source: GameSpot] While it's not part of the official Comic-Con@Home lineup, Rick and Morty had its own panel as part of Adult Swim's own convention, streamed live on Twitch. For the most part, the panel was a look back on Season 4, but that didn't stop co-creator Dan Harmon from teasing what's to come by showing the first footage of Season 5.
▶ Watch the Footage
Fans got a look at a cold open for an upcoming episode. While the animation was unfinished, it looked as though Morty was carrying a wounded Rick back to their ship, before escaping through a rapidly closing portal that sends them on a crash course toward the earth. Facing his own doom, Morty calls up his crush Jessica to confess his feelings, only to be shocked when it turns out she likes him back and asks him out to watch a movie.
That's all it takes to convince Morty he needs to live and he manages to land the craft without killing himself and Rick, crashing it into the ocean. That, however, opens up a whole new problem as it puts Rick face-to-face with his nemesis Mr. Nimbus, who appears via a giant clamshell from underwater and carries a trident. There's little you find out about him, other than he likes to say his name a lot.

That's where the cold open ends. While it doesn't necessarily give away anything about the new season, Harmon noted that for practically the first time ever, the show is ahead of schedule.

"We're basically done writing it. The only exception is I get on these Zoom edit sessions where we're kind of finalizing the finale of Season 5," he explained. "It's a crazy situation to be in because this show has notoriously kept everyone behind schedule."
Posted by anim8trix at 12:00 AM