ATTACK on TITAN: Final Season
Plot Summary: Gabi Braun and Falco Grice have been training their entire lives to inherit one of the seven titans under Marley's control and aid their nation in eradicating the Eldians on Paradis. However, just as all seems well for the two cadets, their peace is suddenly shaken by the arrival of Eren Yeager and the remaining members of the Survey Corps. Having finally reached the Yeager family basement and learned about the dark history surrounding the titans, the Survey Corps has at long last found the answer they so desperately fought to uncover. With the truth now in their hands, the group set out for the world beyond the walls. In Shingeki no Kyojin: The Final Season, two utterly different worlds collide as each party pursues its own agenda in the long-awaited conclusion to Paradis' fight for freedom.
3:15 - 4:40    Mobile Suit Gundam: Hathway [Movie] 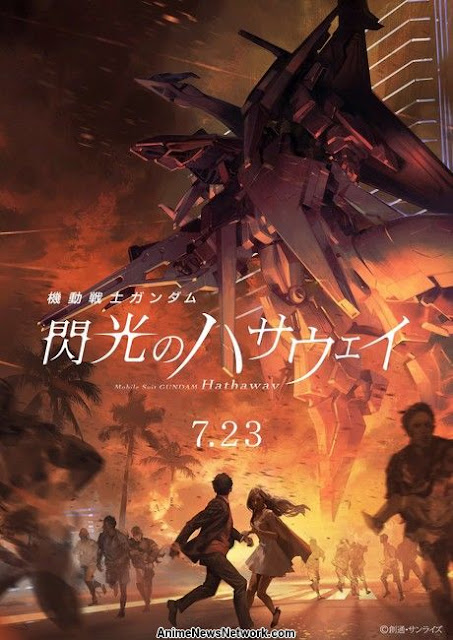 Mobile Suit Gundam: Hathaway
Plot Summary: U.C. 0105, twelve years after the Second Neo Zeon War, the Earth Federation accepts the Republic of Zeon back in the fold. However, over the next few years, the Federation's greed and distrust of spacenoids leads them to form "Man Hunter" units to forcefully deport underprivileged or undesirable civilians around the world to the space colonies. A terrorist organization called Mafty is led by Bright Noah's son Hathaway Noa. Hathaway, who now goes by the name Mafty Navue Erin, is still haunted by his past actions regarding the death of Quess Paraya and reflecting upon the actions and beliefs of Char and Amuro. He started his terrorist actions against the Federation and its high officials as an act of revenge, using the new prototype unit, the RX-105 Ξ Gundam (Xi Gundam, "Ksi Gundam"). In response, Kenneth Sleg of the Earth Federation Space Forces assembles the Circe Unit, led by Lane Aim piloting the RX-104FF Penelope in order to stop Mafty.
Posted by anim8trix at 12:00 AM