Masters of the Universe: REVELATION Trailer 2 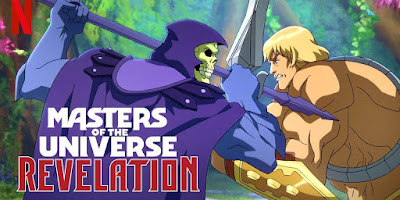 MASTERS of the UNIVERSE: REVELATION
A radical return to Eternia, Revelation is a direct sequel series to the classic era of Masters of the Universe. Featuring fan favorites He-Man, Orko, Cringer, and Man-At-Arms, the story pits our heroic warriors, and guardians of Castle Grayskull against Skeletor, Evil-Lyn, Beast-Man and the vile legions of Snake Mountain. But after a ferocious final battle forever fractures Eternia, it's up to Teela to solve the mystery of the missing Sword of Power in a race against time to prevent the end of the Universe! Her journey will uncover the secrets of Grayskull at last. This is the epic He-Man and the Masters of the Universe saga fans have waited 25 years to see!
▶ Watch the Trailer
Posted by anim8trix at 12:00 AM