Fire Will Reign... Dragons Will Rise... 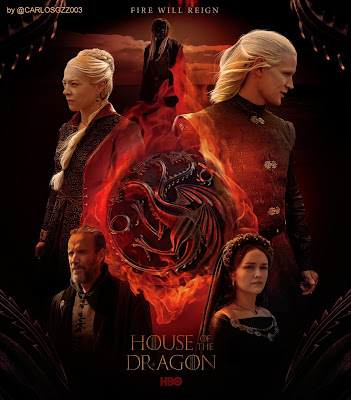 HOUSE of the DRAGON
Gods. Kings. Fire. Blood.
House Of The Dragon is coming to HBO Max in 2022.
House of the Dragon is an upcoming American fantasy drama television series created by George R. R. Martin and Ryan J. Condal for HBO. It is a prequel to the television series Game of Thrones (2011–2019) and is based on Martin's 2018 novel Fire & Blood. The series is set two hundred years before the events of Game of Thrones and chronicles the beginning of the end of House Targaryen and the events leading up to the Targaryen civil war, known as the "Dance of the Dragons". House of the Dragon received a straight-to-series order in October 2019 with casting beginning in July 2020 and principal photography beginning in April 2021 in the United Kingdom. The first season of the series is scheduled to premiere in 2022 and will consist of ten episodes.
▶ Watch the Trailer
Posted by anim8trix at 12:00 AM