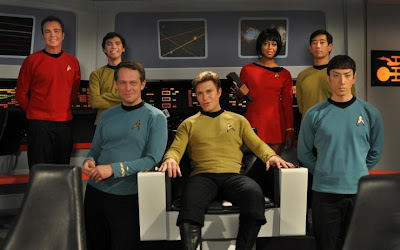 [Source: Syfy.com] Lots of people try to make fan versions of Trek. None of them look like this.

To be totally honest, whenever there's another attempt by a fan group to continue the adventures of Kirk, Spock, et al., my eyes instantly glaze over. Maybe I'll give the trailer a look, but I'm usually out in under a minute. Fan efforts just never really approach the campy goodness of the original.

But Star Trek Continues? Friend, its warp nacelles are a cut above the rest. And if you're wondering why it's so good, here's your answer -- pedigree.

Montgomery Scott is played by Christopher Doohan. Name sound familiar? That's original Scotty, Jimmy Doohan's son! How cool is that? And the ship's computer? Why, it's only played by Counselor Deanna Troi, Marina Sirtis, herself!

Then there's the pilot episode, wherein the producers decided, "Hey, let's do a sequel to Who Mourns for Adonais?" Oh, and while we're at it, let's get the actor who played Apollo in that classic episode to come back and reprise the role.
Posted by anim8trix at 12:30 AM