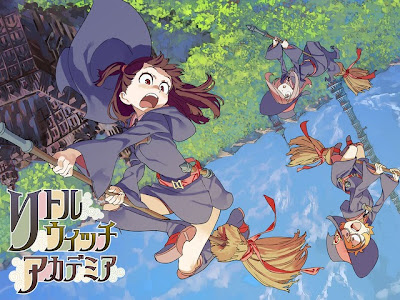 The Japanese animation studio Studio Trigger formally announced the sequel to its animated short Little Witch Academia by launching a crowdfunding project for it on Kickstarter. The original cartoon, which is currently streaming on Youtube and Crunchyroll, was one of four animated shorts created under the 2013 Anime Mirai project with Government funding as an initiative to foster the talents of up-and-coming animators. Credits for the tentatively-titled Little Witch Academia 2 confirm Yoh Yoshinari, Masahiko Otsuka and Naoko Tsutsumi returning as the director and character designer, scriptwriter and producer respectively.
Trigger had originally set a 20-minute runtime for the sequel and launched its crowdfunding project to raise $150,000 to increase the length by 15 minutes. At the time of this writing, the goal has already been more than achieved with a total of over $217,000. Studio Trigger has affirmed that it is considering stretch goals for the project.

Studio Trigger expects production on Little Witch Academia 2 to finish in the Winter of 2014. At this time, the studio plans to subtitle the cartoon in seven different languages and produce a Blu-ray release for April 2015.

In addition to staff biographies and preproduction artwork, the Kickstarter page for Little Witch Academia 2 offers this summary of the new project:

As a young girl, Akko was fascinated and mesmerized by Shiny Chariot’s magic show. Determined to become a witch just like Shiny Chariot, Akko enrolls in the prestigious witch academy, Luna Nova. Contrary to her expectations, the classes are unexpectedly boring. Akko struggles to keep herself in high hopes and spirits, but the reaction from her peers remain indifferent. In the previous episode, Akko became the school’s hero by slaying the dragon that appeared from the underground dungeon, but her fame is short-lived. The new episode will be a sequel with new characters to the previous episode.
Posted by anim8trix at 12:30 AM