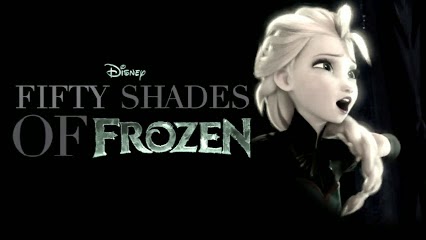 Were you one of the people who thought Frozen wasn’t quite kinky enough? No? Well, just in case, a delightfully twisted and inventive YouTuber mashed up the most popular animated film of all time with the most viewed trailer of the year for Fifty Shades of Grey, to give us all the (perhaps completely unwanted) gift of a much steamier Hans and Anna romance.

YouTube user Tranceart Violeta pieced together scenes from the Disney hit that fit perfectly — almost creepily so— with the trailer audio from the hotly anticipated adaptation of the S&M romance. For instance, you might not have initially noticed that the manipulative prince Hans has a lot in common with control-freak corporate titan Christian Grey. If so, prepare to be enlightened, as Anastasia/Anna says in the clip. Turns out a faster way to melt all that ice in Arendelle would’ve been to play Beyoncé's sexed-up, slowed-down version of "Crazy in Love."
Posted by anim8trix at 12:00 AM