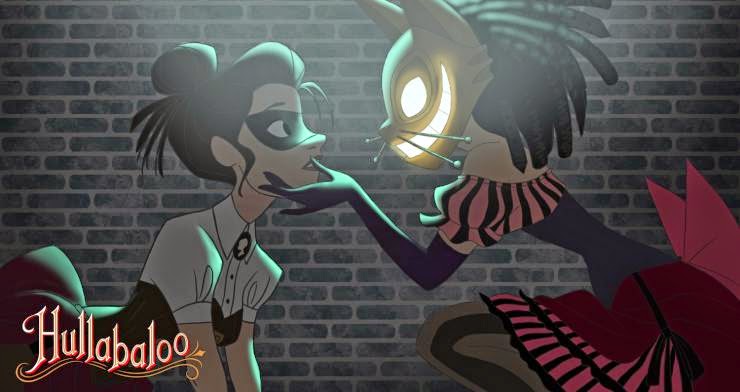 Former Disney artists keeping hand-drawn animation alive with new crowdfunded, steampunk indie film
[Source: blastr.com] It’s been a long time since a major studio put forward the time and money to make a hand-drawn film, so a team of former Disney and Dreamworks are taking it upon themselves to keep the unique visual style alive.

Dubbed Hullabaloo, the steampunk animated superhero story is the brainchild of creator James Lopez (The Lion King, The Emperor’s New Groove) and a veteran team of animators, modelers, composers and voice actors. Lopez is a Disney veteran who has also served stints at Warner Bros. and DreamWorks, so he definitely has the cred.
Here’s the official synopsis:

Hullabaloo is the story of Veronica Daring, a brilliant young scientist who returns home from an elite finishing school to find her father--the eccentric inventor Jonathan Daring--missing without a trace! The only clue left behind points Veronica toward Daring Adventures, an abandoned amusement park used by her father to test his fantastical steam-powered inventions. There she discovers a strange girl named Jules, a fellow inventor who agrees to help Veronica in locating her missing father and discovering the secrets of his work.
Together, Veronica and Jules learn that Jonathan Daring has been kidnapped by a mysterious group of influential persons, who seek to use his latest invention for nefarious purposes. These villains are wealthy and influential and neither Veronica nor Jules can stop them openly. But determined to save her father and holding true to the family creed that technology should be used for the good of all, not the greed of some, Veronica assumes the secret identity of “Hullabaloo”, a goggled crusader who uses wits and science to combat evil and oppose the nefarious conspiracy that has taken her father.

Lopez and his team are hoping to raise $80,000 on IndieGoGo to create a professional proof-of-concept short with hopes to eventually make a full-length animated film. But more than just trying to get a cool movie made, Lopez is championing the dying art of hand-drawn animation. It’s been five years since Disney put out a hand-drawn animated movie, and there don’t seem to be immediate plans to create any new ones in the foreseeable future. Enter Lopez.
CONTRIBUTE NOW
We love the look of the concept art, and it’d be a crying shame if hand-drawn animation really does fade away in favor of CGI and 3D modeling. It’s an indelible component of film history, and if these guys think their little steampunk hero can save it, then godspeed.
Posted by anim8trix at 12:00 AM