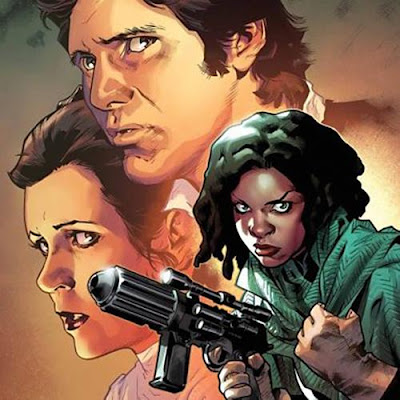 Warning: Big comic book spoiler to follow
[Source: Yahoo!Movies] Turns out Han Solo wasn’t so solo after all. The most recent Star Wars comic (No. 6) marks the debut of a new character named Sana Solo — who introduces herself as Han’s wife. Since this comics series is set between A New Hope and The Empire Strikes Back, the revelation (provided it proves true in future issues) casts Han and Leia’s budding romance in a whole new light.

According to The Hollywood Reporter, Sana arrives at the end of the book, interrupting a flirty moment between Han and Leia. “The name is Sana Solo. I’m his wife,” announces the blaster-wielding newcomer. (See image below.) The same character appears on the cover of issue No. 9 (above), suggesting that she’s a major player in the storyline to come.
Right now, Sana Solo has only appeared in the Marvel comics — but she could have a direct effect on the Star Wars films. Disney and Lucasfilm are treating the current comic series as canon, meaning that anything that happens in the comics, officially happened in the movie universe. So even if we didn’t know it until now, Han could have been secretly married during the entirety of the first Star Wars film. (That two-timing, scruffy-looking nerf herder!)

Ironically, an early version of A New Hope hinted that Han had other love interests. In rough, later-excised footage from the Mos Eisley Cantina scene, Han is seen kissing an unnamed woman (whom fans have dubbed “Jenny” after the actress who played her, Jenny Cresswell). She leaves the booth before Han’s negotiation with Luke Skywalker and Obi-Wan Kenobi, never to be seen again. Watch the scene here.
Posted by anim8trix at 12:00 AM