'Inside Out' is the BEST Pixar movie ever! 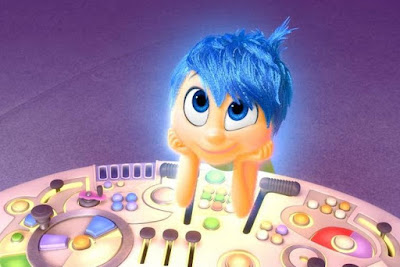 I N S I D E   O U T
[Source: NPR.org] If you decide to see Pixar's Inside Out — and you absolutely should — see it in 3D. Not only is the film brilliant in three dimensions, but the format brings with it an additional perk: no one can see you crying behind 3D glasses.


Pixar could teach a graduate-level course in making grown adults weep at animated children's movies. In 2008, WALL-E made me shed tears when EVE tried to piece the tiny robot back together. I can't even talk about 2009's Up without thinking of that montage, while 2010's Toy Story 3 had that gut-wrenching moment when all the toys hold hands. And the tradition continues this summer with the release of Peter Docter and Ronaldo Del Carmen's Inside Out — the studio's most thoughtful and ambitious film to date.


"You need me to be happy," says 11-year-old Riley (Kaitlyn Dias), the movie's precocious protagonist, during one of the film's most poignant scenes. She's talking to her parents, who have moved the family from bucolic Minnesota to the intimidating city of San Francisco.


"But," Riley continues, hesitating. Her voice cracks before she can finish.


That emotional fissure in Riley's psyche is where Inside Out lives, as Docter and Del Carmen (who co-directed and co-wrote the film with Meg LeFauve and Josh Cooley) explore universal feelings like joy and sadness, boil them down to their elemental cores, personify them, and invite us to see how they shape us and the people we love, one memory at a time.


Attempting to anthropomorphize human thought and emotion is a daunting, conceptually challenging task. It would've been easy for any of Pixar's past films to crumple under the weight of such a heavy objective without cute robots, earnest cowboys, squirrel-chasing dogs, and rainbow-hued balloons to lighten things up. But Inside Out feels different. The movie flies on the wings of an almost too-real message — that sadness is an inevitable and necessary part of life. And yet again, Pixar soars.


Inside Out is as beautiful as it is abstract, as daring as it is intelligent. It's also the best movie of 2015 so far.

Relax — it's all inside your head 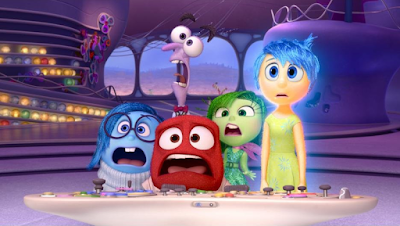 The voices inside our heads. (Pixar/Disney)
Though Riley is the heroine we're rooting for, she's basically a human Voltron. Her actions are guided by five emotions: the buttercream gumdrop Joy (Amy Poehler); the baggy blue dollop Sadness (Phyllis Smith, a.k.a. Phyllis from The Office); the petulant and red-faced Anger (Lewis Black); the snotty green Disgust (Mindy Kaling); and the skinny, purple-skinned Fear (Bill Hader). These five primary feelings work in unison to make each and every one of Riley's decisions — decisions that keep her safe, help her meet new friends, and do everything from scoring hockey goals to judging new experiences.


Because Riley is a kid who has yet to experience such grown-up rites and responsibilities as heartbreak and paying taxes, Joy has always been the leader of Riley's feelings, creating plenty of memories imbued with the cozy warmth of unfiltered happiness. But the cross-country move has shaken things up for the team and inspired Sadness to step into a more proactive role, causing tension with Joy and kick-starting an emotional adventure inside Riley's mind.


Within the confines of Riley's brain, Inside Out does a hefty amount world-building, all of it stunning. The five emotions operate a control panel fit for a spaceship. There's plenty of Disney whimsy, in that everything looks sugar-spun and edible. The humor is sharp and adult-friendly (Riley's dreams are filmed in an unnamed studio I wish was called "DreamWorks"), and abstract concepts are presented clearly, with help from elements of modern-day tech. For instance, memories are like Vines, and can be fast-forwarded or rewound and watched over and over. Everything comes together in a way that's easy for viewers of all ages to grasp and understand. And it all lies atop the foundation of Inside Out's grand design: the idea that our emotions dictate our memories, which in turn dictate who we are.


Inside Out's humor comes from watching the five emotions wrestle for control, and witnessing how their actions and arguments change Riley's behavior or personality. There's an entertaining aural ping-pong and rhythm that arises as Poehler, Hader, Black, Kaling, and Smith trade jokes. It's human nature to want to be happy, to want everything in our lives to remain joyous, and Poehler as Joy is an expertly tailored fit. Her voice is coated in earnestness and indomitable optimism. She can also be very annoying — just as you might expect from someone who tries to find glee in every millisecond of every moment of every waking minute.


As a result, Inside Out features several Joy-filled scenes where you'll find yourself yearning for Smith's mopey Sadness or Kaling's tweenage Disgust. The movie makes excellent use of its strong voice ensemble, and that's a testament to the impressive storytelling at work.

Inside Out's greatest trick is convincing people it's a comedy 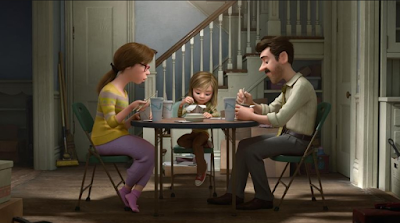 Riley and her parents. (Pixar/Disney)
Though Inside Out contains moments of pure comedy and its exquisite design is insidiously imaginative, the film's focus is more knotty and somber. Beneath the glimmer and one-liners is a clear-eyed attempt to depict the full spectrum of human emotion, to urge viewers to accept that aching, sad life experiences are as inevitable as they as valuable.


Some of its lessons are undeniably mature, and may not resonate with younger kids. Compared with Toy Story or Finding Nemo — two moving yet playful movies about growing up and the importance of family — Inside Out feels more adult, more willing to explore the dark crags of what unhappiness feels like. Indeed, relative to Disney's plethora of fairy tales, Inside Out sometimes makes it seem like Pixar is pounding its chest and shouting, "Bullshit!" into the abyss that is "happily ever after."


It may surprise you to learn, then, that the most impactful character of the movie isn't Joy, or Riley, or even Sadness. That honor goes to Bing Bong (Richard Kind), Riley's imaginary friend who's a strange amalgam of an elephant, a cat, candy, and a dolphin. He's lost among Riley's millions of memories, unaware that she's outgrown him.


"Who's your friend who likes to play? Bing Bong. Bing Bong," he sings with an off-key tootle and a smile. But it's slyly obvious to everyone except Bing Bong that he might be the only one who still remembers the song. Bing Bong also delivers a stark message to parents: childhood innocence is precious and will inevitably disintegrate, but it's also necessary.


Inside Out is about relishing the present, remembering to be grateful, and appreciating all the splendid things about the small moments of our lives. It also wants us to understand that treasuring these moments makes us vulnerable. It's a simple but powerful musing on human nature offered up in the bubblegum world of a film. And while Inside Out may not necessarily the most outright fun film Pixar has made, it is without a doubt the studio's best.
Posted by anim8trix at 12:00 AM