Clip for Guardians of the Galaxy animated series 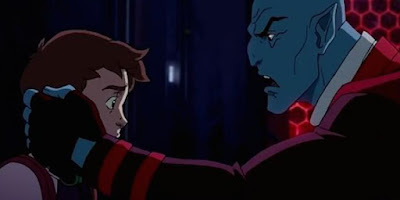 While we endure the excruciating two-year wait for James Gunn's Guardians of the Galaxy Vol. 2 , we can at least satisfy our longings with this new clip from Disney XD's Guardians of the Galaxy animated series. This scene depicts a young Peter Quill (voiced by Hulk and the Agents of S.M.A.S.H.'s Will Friedle) as he encounters Yondu Odanta and his rabble of Ravagers for the very first time. Take a look at this backstory preview and tell us if you're onboard Marvel's animated adaptation when it debuts on Disney XD on Sept. 26, 2015.
Posted by anim8trix at 12:00 AM

Email ThisBlogThis!Share to TwitterShare to FacebookShare to Pinterest
Labels: animation, Guardians of the Galaxy, tv