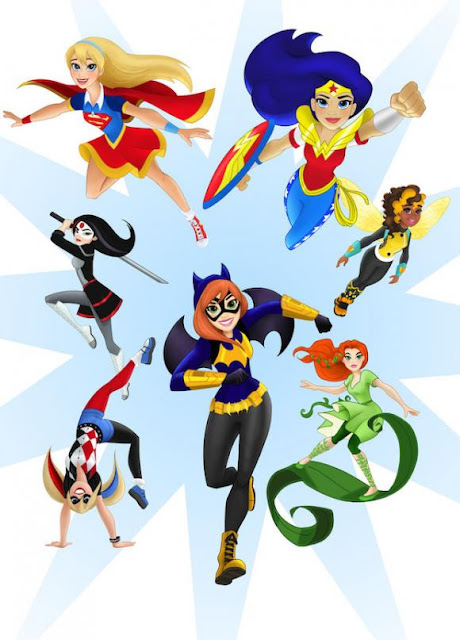 [Source: blastr.com] A lack of girl-friendly superhero fare has been a constant refrain in recent years, and now DC is getting ready to make an ambitious push to address the issue.

As part of a partnership with Mattel, the company has announced a full-fledged superhero universe designed for girls that will encompass comics, TV specials, children’s books, toys and apparel. If you’re a female fan of DC heroes (or the parent to an aspiring Wonder Woman), this should be right up your alley.

DC Super Hero Girls is being aimed at girls 6-12 years of age and will feature young versions of female heroes and villains from across the DC universe as they are still discovering their powers. DC is touting that Wonder Woman, Supergirl, Batgirl, Harley Quinn, Bumble Bee, Poison Ivy, Katana and “many more” characters will be involved, all reimagined in a new kid-friendly art style.

"DC Entertainment is home to the most iconic and well-known Super Heroes including Wonder Woman, Supergirl and Batgirl,” said Diane Nelson, President of DC Entertainment. “DC Super Hero Girls represents the embodiment of our long-term strategy to harness the power of our diverse female characters.  I am so pleased that we are able to offer relatable and strong role models in a unique way, just for girls."

The project is set to launch this fall, and it sounds like DC is aiming for something truly ambitious. Considering the dearth of content out there for young girls, this could be the perfect way to create and nurture fans who’ll go on to be lifelong fans of everything from Batgirl to Wonder Woman.

This is going to be a multi-pronged effort, and the company says TV specials, made-for-videos, toys, apparel, books and other products should hit by 2016. Here’s hoping DC’s push turns out to be a huge success, and now there’ll finally be ample Batgirl and Wonder Woman toys out there to fight alongside Batman and Supes.
Posted by anim8trix at 12:00 AM