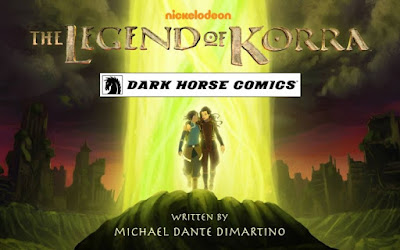 Dark Horse Announces Release Date
For Legend Of Korra Comic Series
[Source: ToonZone] Dark Horse Comics has assured us that the Korra comic project (which was announced last year) is not dead, and released some fresh details today. Like their long-running Avatar series, the Korra comic will tell stories in three mini-novel installments before being published in one big volume. The first of these will be called “Turf Wars.”

The turf in question is the land that the new Spirit Portal is resting on. When Korra and Asami return, they find that it’s causing new problems for residents living around it, and worse yet, a greedy developer wants to make the portal the center of a new amusement park. Michael Dante DiMartino, co-creator of all elemental bending, will personally be writing the script, with feedback from Bryan Konietzko. The art will be handed by Irene Koh.

“Korra has to figure out how to find a new balance in the city with all this stuff that’s gone on,” DiMartino said to EW. “It’s gonna take place right after the finale, so it’s focusing on Korra and Asami’s relationship as a new threat emerges. It’s kind of like the aftermath dealing with the new portal in the city, and all the evacuees coming back to find their homes wiped out cause of the portal.”

The bad news is that we’re going to have to wait even longer to start reading this; the first chapter isn’t due out until June of 2017. But once that date rolls around, you won’t have to rely on fan comics anymore to get your Korrasami fix.
Posted by anim8trix at 12:00 AM