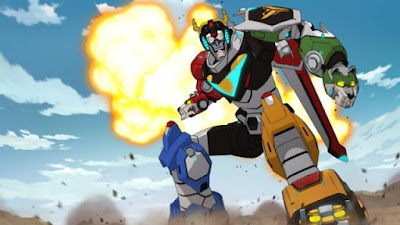 V O L T R O N
When Netflix launched its English-language reboot of the 1980s anime series Voltron, fans had a lot of obvious questions, most of which boiled down to "How closely will this new series follow the old one?" So far, the answer has been "Closely enough to satisfy old-school fans, but not so closely that it feels dated or rigid." The new series is big, bright, and modern, with slick animation and a lot of up-to-date humor. The first season ended on a cliffhanger, with the pilots defeated and scattered after a disastrous battle with their enemies. The second season seems like it's going to follow through on all the ways their situation could get worse before it gets better. Netflix's first round of episodes for Voltron: Legendary Defender debuted on June 10th, 2016, and the second batch is reportedly due later this year.
Read More
Posted by anim8trix at 12:00 AM