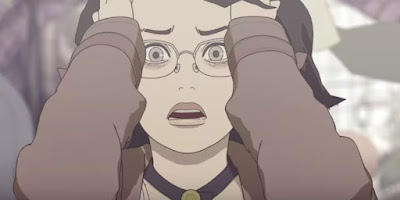 F O R C E  of  W I L L
A new trailer promoting the upcoming Force of Will: The Movie anime anthology film adapted from the popular magic-based trading card game.   Similar to The Animatrix movie from 2003 where filmmakers each fashioned their own anime short film based on The Matrix mythology, Force of Will's chapter format takes inspiration from the Japanese fantasy card game sensation and will showcase six segments each composed by a different director, all existing under the umbrella of the addictive strategy game's universe of elder gods and mythical demons.

Titled L.S, this first frightening peek is directed by Shuhei Morita (Possessions) and spawned from H.P. Lovecraft's Cthulhu mythos, with letters written by a haunted young girl causing a monstrous evil entity to be summoned into the world.   Force of Will:The Movie will be released in 3D sometime in 2018.