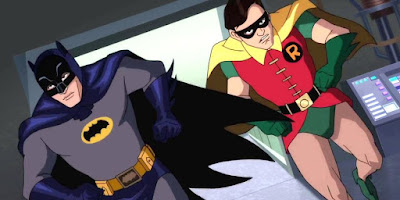 -  B  A  T  M A  N  -
Return of the Caped Crusaders
[Source: blastr] The retro parade keeps on rolling with the release of DC Entertainment's Batman: Return of the Caped Crusaders, voiced by the ever-youthful talents of Adam West, Burt Ward and Julie Newmar, reprising their vintage roles from the original Batman TV series which ran from 1966-68. The new animated feature unspooled during a Fathom Events screening at select movie theaters around the country Monday night, followed by its VOD availability today, Oct. 11, then a Blu-ray and DVD release on Nov. 1. This latest dip into the nostalgia well was directed by Rick Morales (Justice League: Cosmic Clash) and gathers a cadre of crazy Bat villains in a cool flashback caper that'll have you sporting your tie-dyed t-shirt and flower-power headband before you know it.

It’s back to the 1960s as Batman and Robin spring into action when Gotham City is threatened by a quartet of Batman’s most fiendish foes – Penguin, The Joker, Riddler and Catwoman. This time, the four Super-Villains have combined their wicked talents to hatch a plot so nefarious that the Dynamic Duo will need to go to outer space (and back) to foil their arch enemies and restore order in Gotham City. It’s a truly fantastic adventure that will pit good against evil, good against good, evil against evil … and feature two words that exponentially raise the stakes for both sides: Replicator Ray. Holy Multiplication Tables!

Fire up the Bat Boosters and watch this new clip of the Batmobile bolting out of the Batcave.
Posted by anim8trix at 12:00 AM