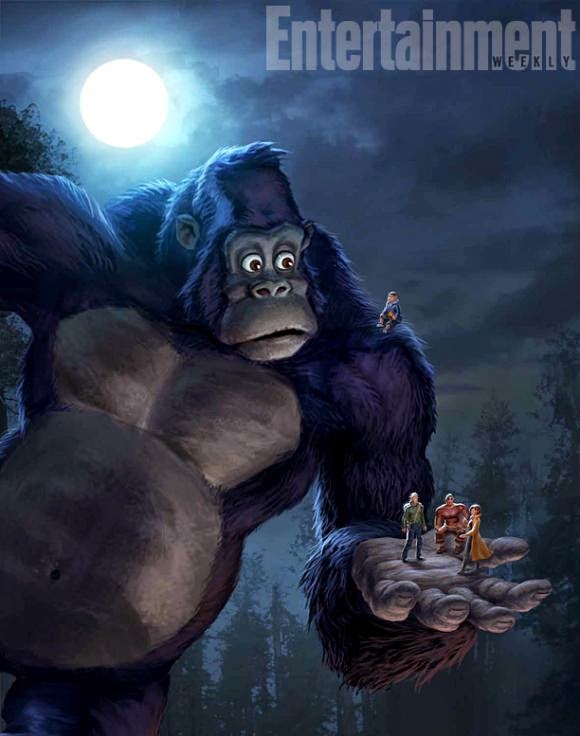 KONG - King of the Apes
[Source: blastr.com] Good news, Kong lovers: We’ll get a double dose of King Kong in 2016. Not only will we have Skull Island, a King Kong movie prequel starring the Prince of Mischief himself (Tom Hiddleston), but Netflix will also air a new animated series titled Kong — King of the Apes.

However, we’re being told that it won’t be the same ol’ same ol’ Skull Island story we’re used to.

Set in 2050 (yep!), the series has Kong become a wanted fugitive after wreaking havoc at Alcatraz Island’s Natural History and Marine Preserve. Humans who hunt for Kong don’t know that the legendary king of Skull Island was framed by an evil genius, whose plans are to terrorize the world with an army of enormous robotic dinosaurs, because, of course, they are. Kong is the only beast strong enough to save humanity from them, and he’s helped along by three kids who know the truth about the colossal ape.

The original CGI animation series from Netflix and 41 Entertainment will be primarily targeted at kids, and will be introduced by a feature-length flick, followed by 12 half-hour episodes, all set to air in 2016.

Industry vet Avi Arad, who has produced Iron Man, the Spider-Man movies and many of the X-Men films, will executive-produce the animated series.

“We’re thrilled to be working with Avi who has made some of the most successful action and adventure franchises today and whose Pac-Man and the Ghostly Adventureseries has been very popular on Netflix around the world. With 41 Entertainment as our partner on this, we continue to work with some of the finest animation studios around the world to create shows that will appeal to kids of all ages globally. I always loved King Kong. This is a unique opportunity to introduce him in brilliant CGI animation to kids worldwide with the power of Netflix.”