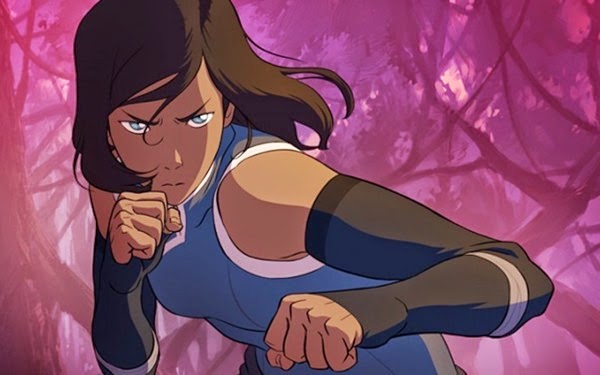 [Source: ToonZone] With the fourth and final season of the Legend of Korra underway the show’s panel at NYCC had an air of finality to it, and familiar guests were introduced by Nickelodeon VP of series animation Megan Casey: Executive producers Michael DiMartino and Bryan Konietzko were joined by voice cast members Janet Varney (Korra), David Faustino (Mako), and P.J. Byrne (Bolin).
After a brief welcome from Konietzko DiMartino introduced the audience to the second episode of Book 4, Korra Alone, which was screened a day ahead of its public release. He commented that whereas Korra’s presence was scarce in the first episode of the season this episode is fixated on the lead character and her struggle to recover from the events of Book 3′s ending, and that for them this was a “crowning achievement” in terms of the serious moments they’d done in the show and in Avatar: The Last Airbender. With that the entire panel left the stage to watch the episode from the floor, to the delight of enthused fans near the front of the room.

With the episode completed, everyone returned to the stage and it became time for some treats for the audience and words of farewell. Varney, Byrne and Faustino presented a humorous outtake-laden video of the trio at the recording studio that ended with words of appreciation to the creative team and the fans. In addition an audio clip was played of the trio recording together for the first time, auditioning to see what kind of chemistry they would have together. The scene an early version of an exchange in episode 2 of Book 1, where Bolin introduces Korra to Mako while being oblivious to the fact that she is the avatar. In the early draft the scene is considerably prolonged by banter between Bolin and Mako and some extra sass from Korra. Eventually Mako catches on and clues in his brother about who Korra is, contrary to the finished episode where he has his “you’re the Avatar, and I’m an idiot” moment. Playing the clip was P.J. Byrne’s idea.

With those treats finished, the voice cast took turns expressing warm sentiments about their time on the show. Varney recounted a time when Sara Noonan at Nickelodeon asked her ahead of the show’s premiere if she was ready for her life to change, which she finds it has due to the fanbase and the work itself. Varney remarked that she can’t imagine working on anything better than The Legend of Korra and that she was “honored” to be a part of it. “I believe in this show the way I believe in ‘Avatar.’ It’s going to live forever because it is just that Goddamn good!” Faustino thanked the fans for their support on social media and cited the “tremendous time” he had working on the show, while Byrne thanked the creators for their work in delivering a “historic show” and feels that his time on the show was “a gift”. Byrne also remarked that the others are like family now and Faustino agreed, divulging that Byrne and Varney have been to his house. Byrne ended by acknowledging Konietzko and DiMartino, saying that the world would be lucky to receive whatever they come up with next.

After this Konietzko and DiMartino reciprocated with thanks for the voice cast and their whole creative team, with Konietzko acknowledging that they didn’t do it all alone and that they have been fortunate to have talented people on the project that care as much as they do. DiMartino thanked Varney, Faustino and Byrne for their commitment and called them part of the “Avatar family”, prompting Konietzko to chime in with thanks for the way they’ve been “great ambassadors” for The Legend of Korra.

With that Konietzko began a presentation of conceptual artwork related to the events of Book 4, which is summarized below. Images can be clicked on and enlarged.


Kuvira and Her Followers 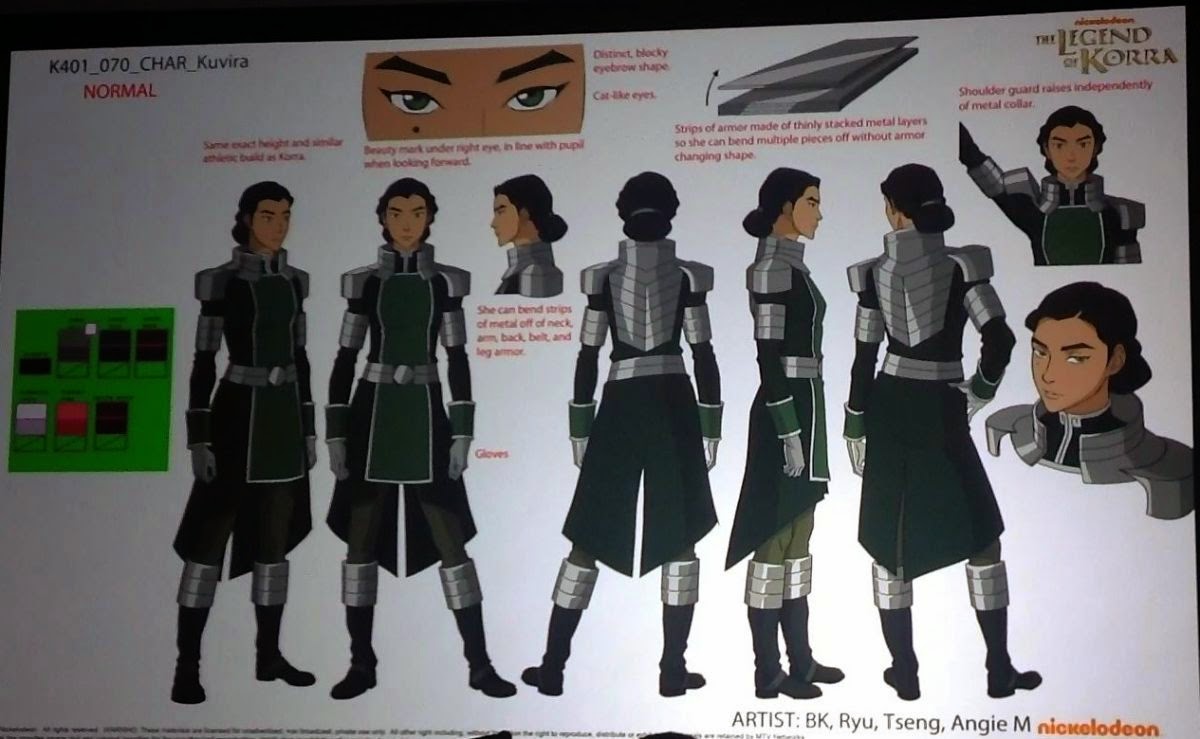 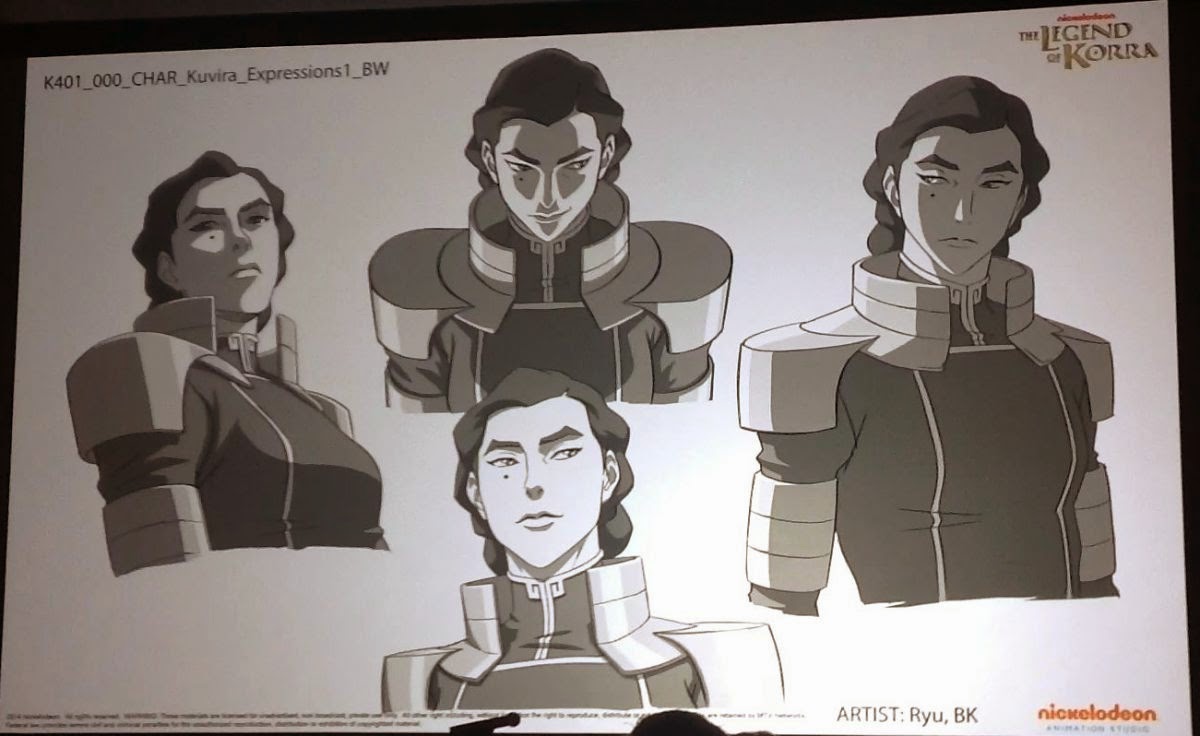 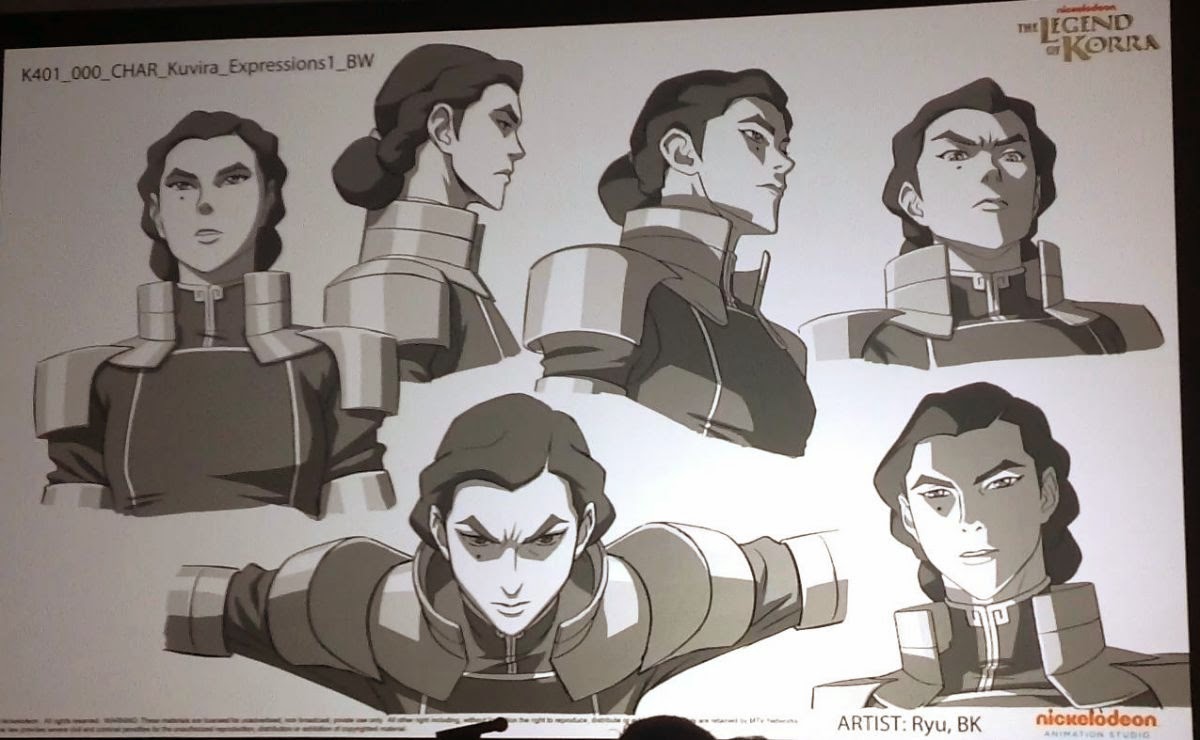 While the team was writing Book 3 they came up with the idea that Kuvira would be Book 4′s main antagonist, so they tried to “weave her throughout the season” and she was one of the metalbending dancers at Su Beifong’s gymnasium in “The Metal Clan”. Konietzko wanted her to be a “kickass metal bender” and gave her armor to match that idea early on, although he ended up adjusting it out of worry the early design was “too superhero-y”. He also knew it would be a complicated design to animated and wanted to simplify things. This was also a reason Kuvira ended up with a bun hairstyle instead of a long braid from her early design, as “the animators in Korea almost killed me for the tassels the Earth Queen had” while he reasoned that she would have a more “refined look” as a military leader. Kuvira’s outfit helped define the look for the rest of her army. 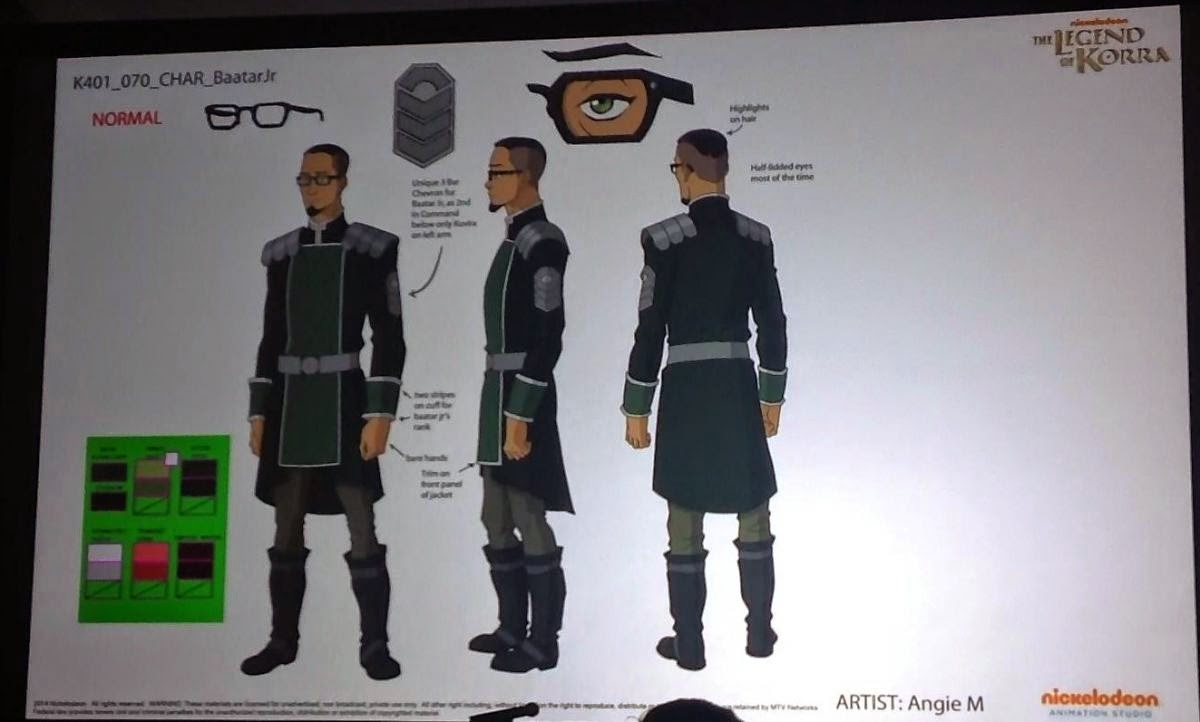 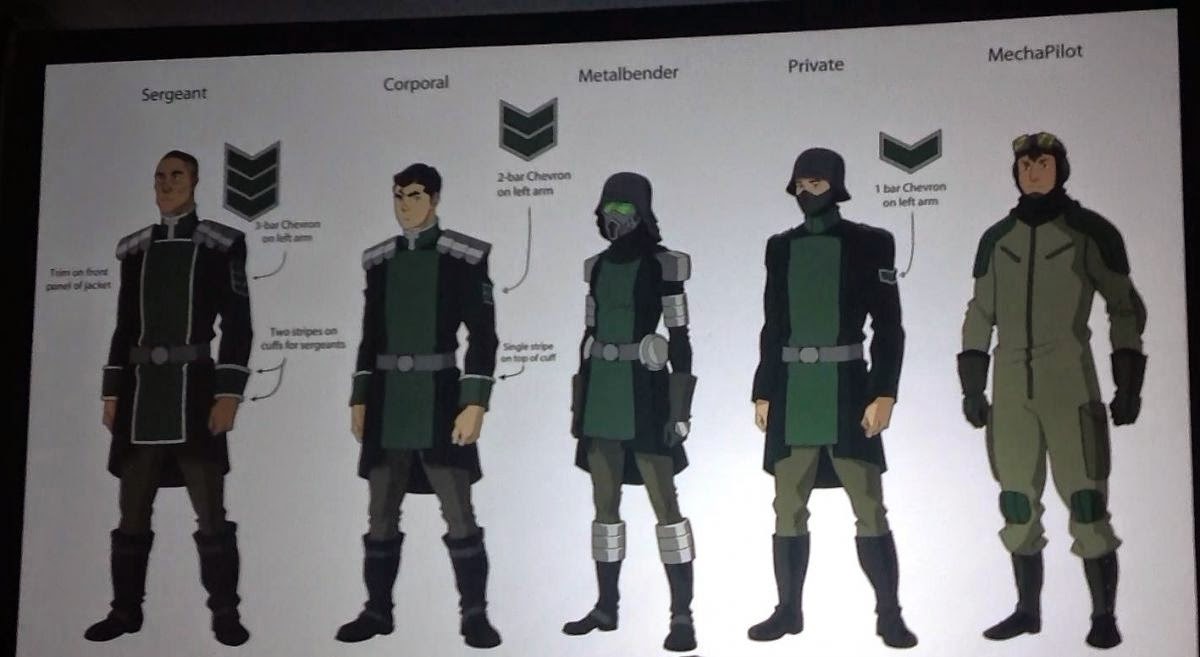 Kuvira’s second in command is Baatar Jr., a “wet noodle”. Konietzko didn’t have time to do it, but he wanted to come onto stage dressed up in his uniform. The different ranks in Kuvira’s army are denoted to Chevron badges, with the number of bars denoting the level of rank. Bolin holds the rank of Corporal. The “Stormtrooper-y” metalbenders bear a “World War II style helmet with a samurai influence”, while to him the helmets and masks of the Privates are “G.I. Joe flashbacks” as he grew up on the show. 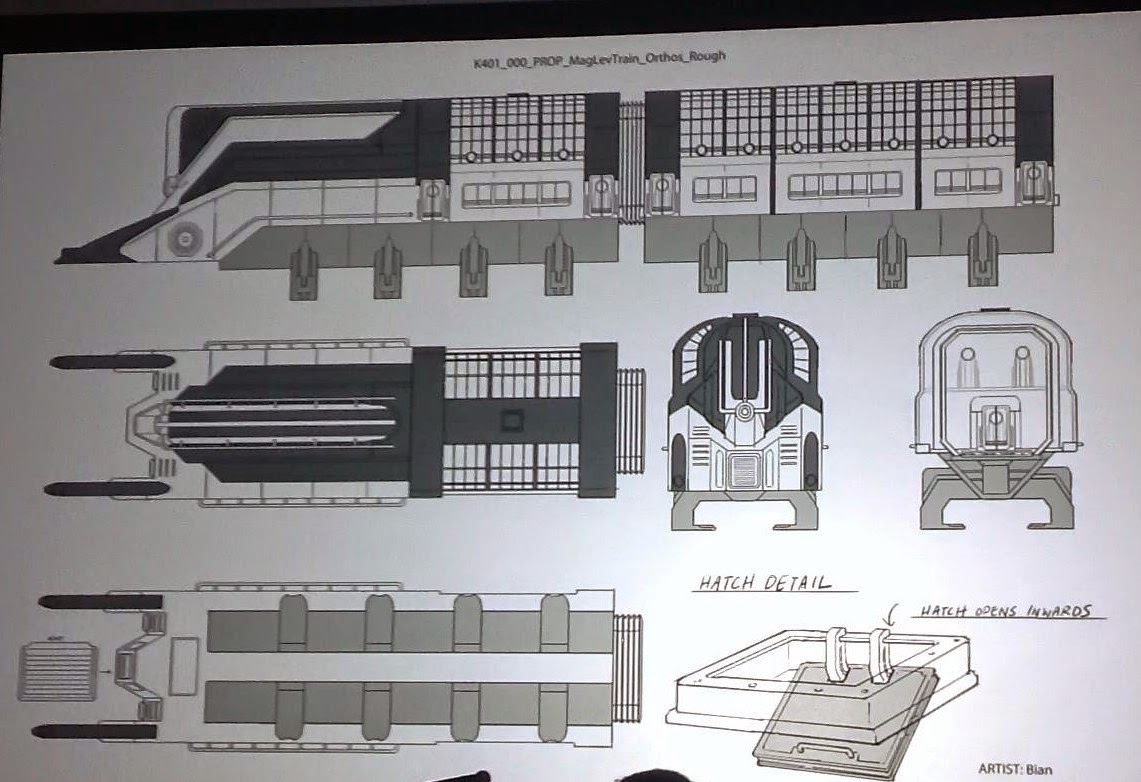 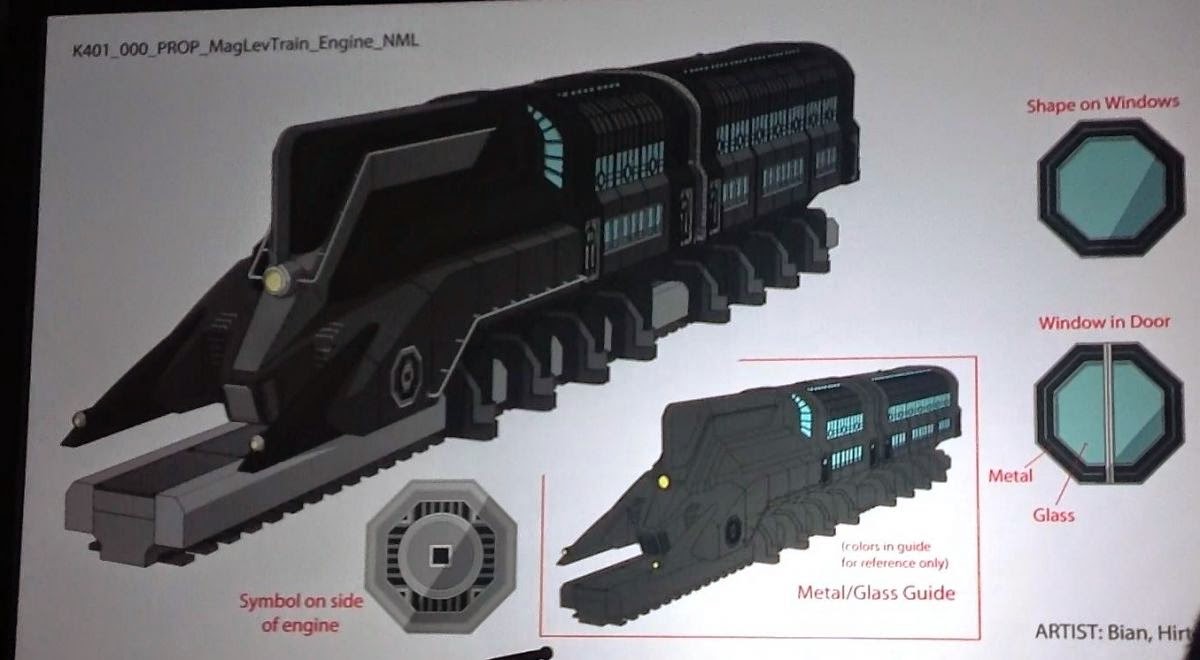 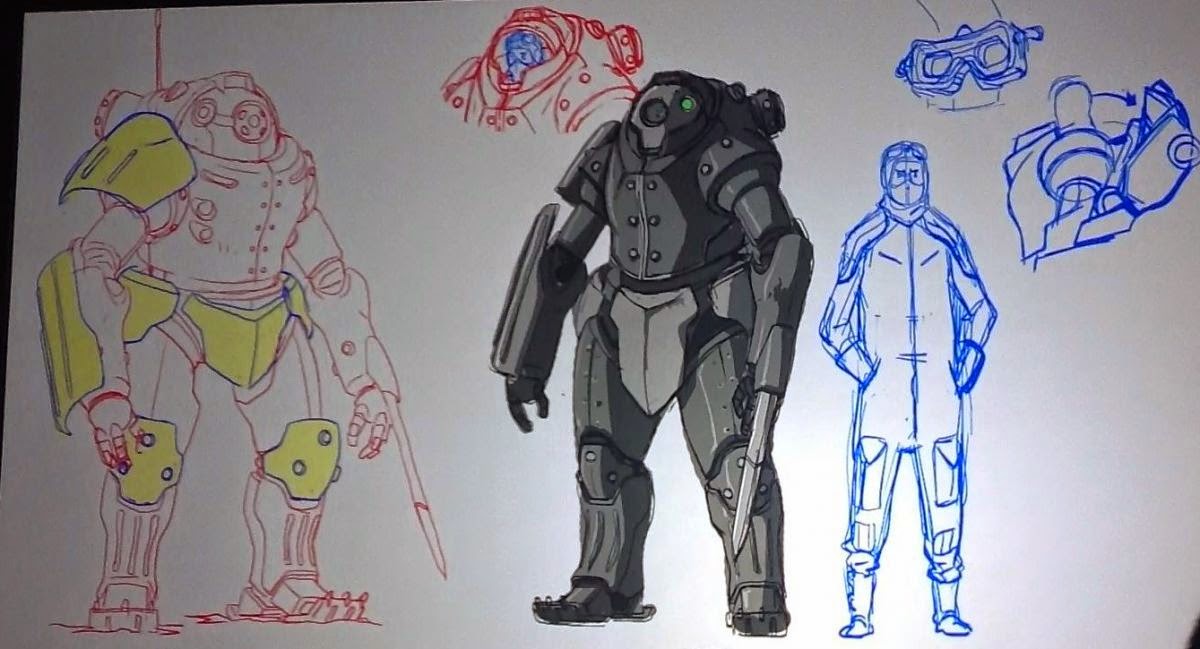 Kuvira’s people make use of vehicles reminiscent of bullet trains, drawing on Varrick’s innovations with magnets. The designs of their hardware are intended as militaristic variations on the art deco look that characterizes the city of Zaofu. As a “master of robots” Joaquim Dos Santos conceptualized the mecha of Kuvira’s army as streamlined metal suits used by Kuvira’s soldiers, but because the storyboard artists kept drawing them larger than intended they were scaled up and outfitted with new features. 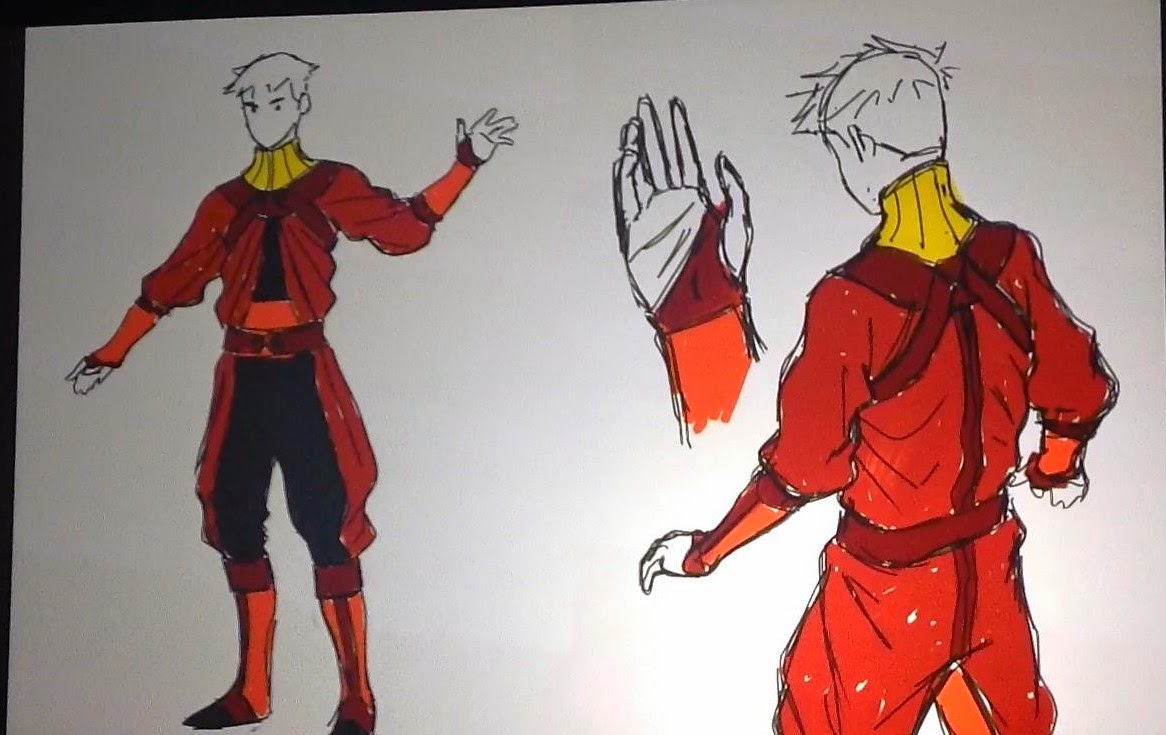 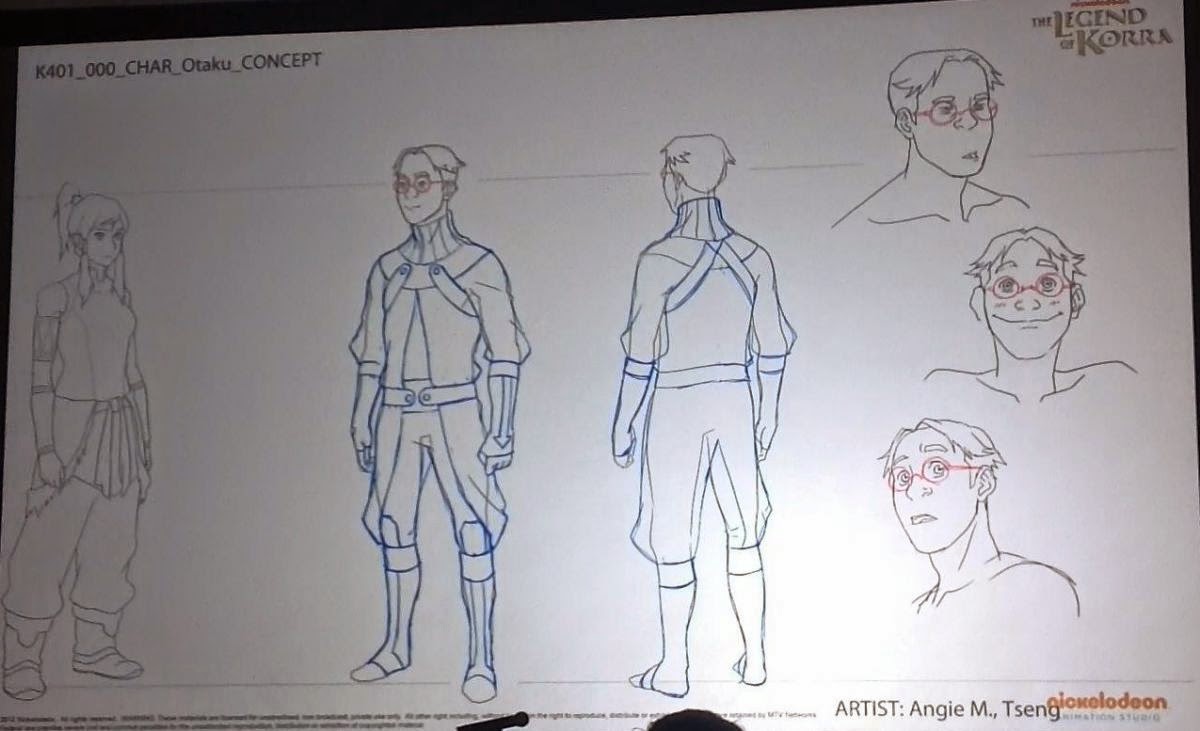 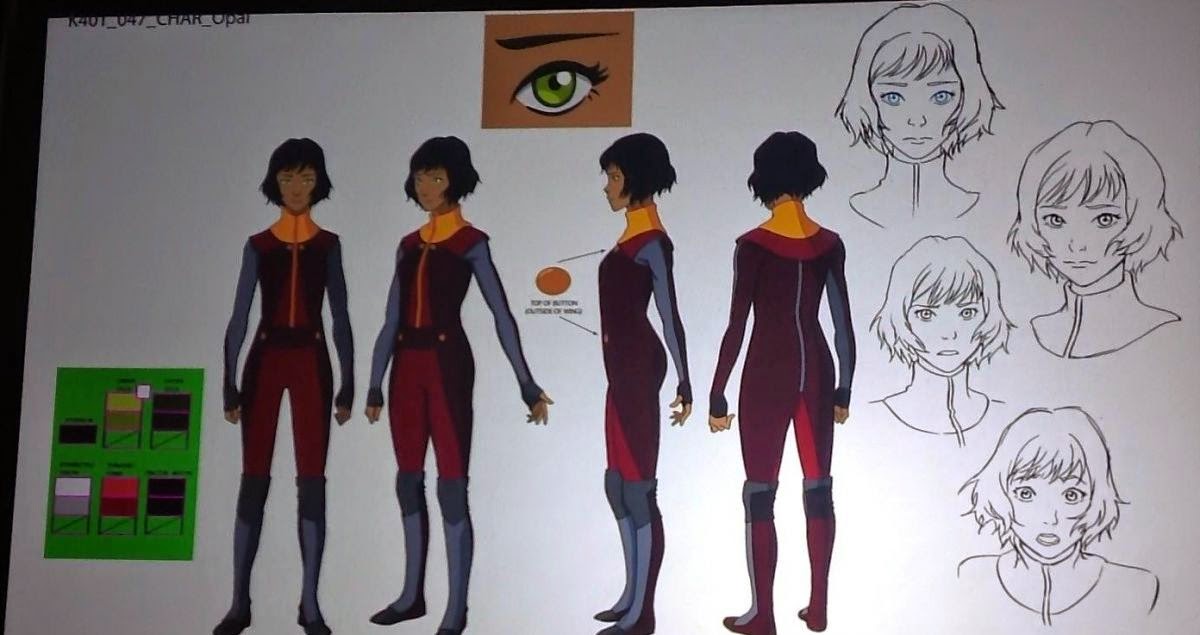 The team went about “modernizing” the air nation with the new wingsuits used by the new generation of Airbenders in Book 4, which Konietzko revealed were designed by none other than Asami herself and produced by her company. The early designs had a baggy sort of look, which they soon streamlined as they imagined how the suit would look when the user was in flight. Opal was used as the main model for the final design. Konietzko noted that some have observed that Opal and Korra seem to share a similar hair style, which was actually not intended per Opal’s model sheet. But after animation and coloring work, the similarities of their hair worked out that way. Konietzko is “stoked” about how the wingsuits ultimately worked out and was pleased to observe the final result when Kai and Opal debuted them in Book 4′s first episode. 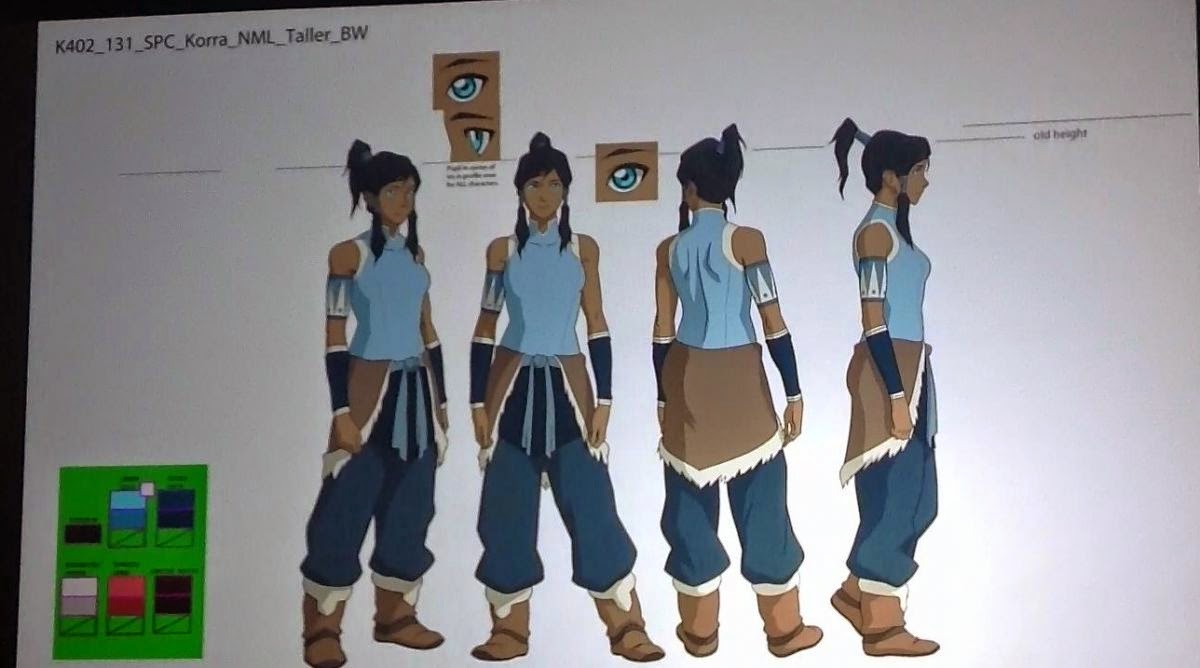 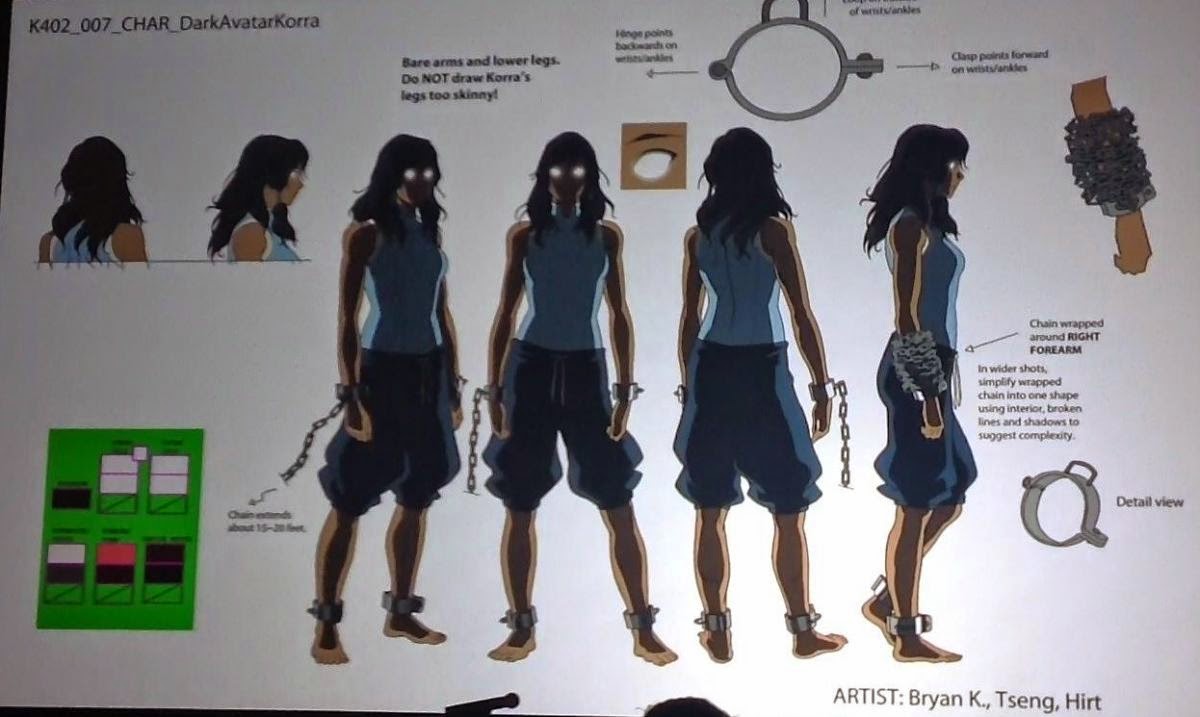 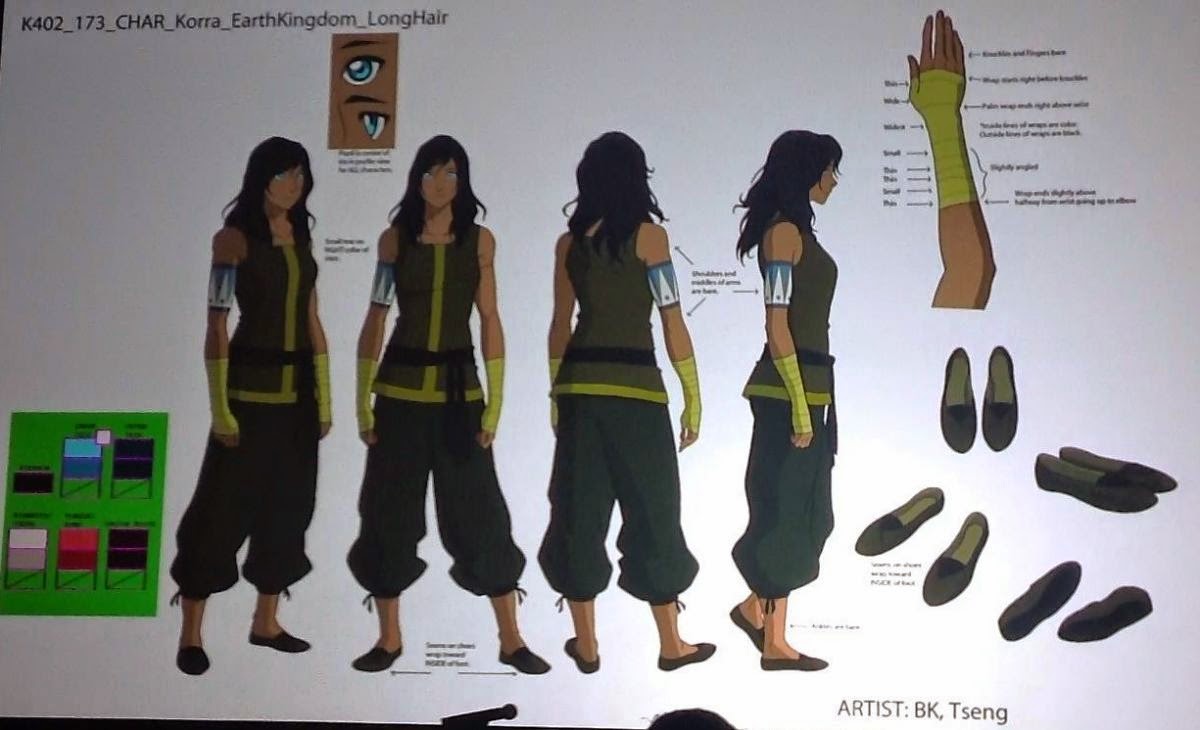 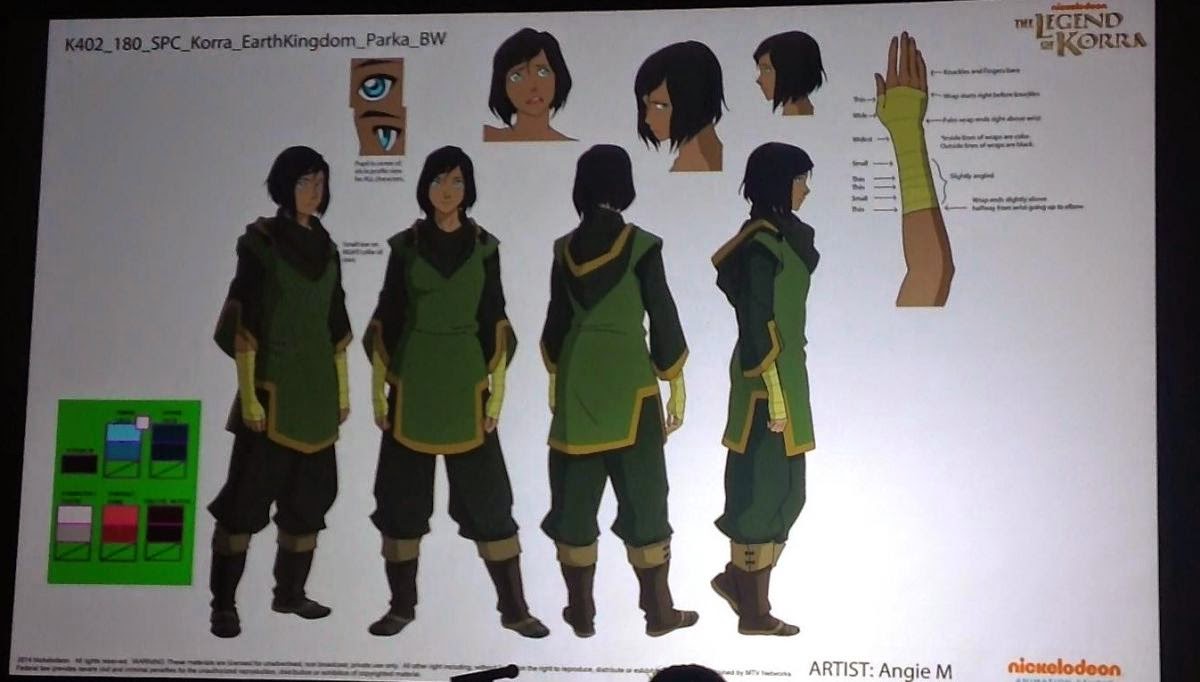 A significant three year time skip separates Book 4 from Book 3, and Korra was made taller since according to Konietzko this is the easiest way to show that someone has grown up in animation. “Sorry haters, Korra is even taller now!” The dark spectre of her Avatar self that she sees constantly throughout Korra Alone shares her new height. Every look Korra sports in Book 4 demands their own original designs, from her varying Earth kingdom-themed garb and new hair styles to her appearances when she suffers battle damage. In time Korra will take on a new “Korra, the Avatar look” evocative of her original appearance. 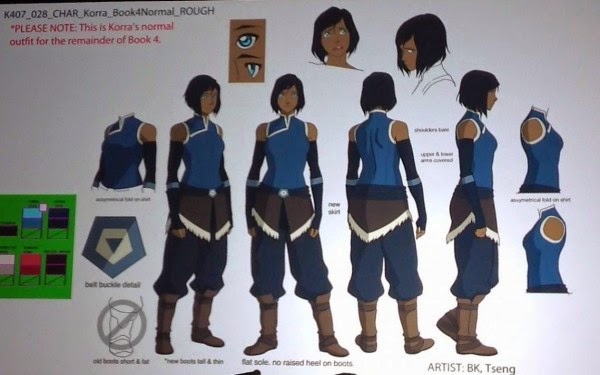 Saying Goodbye and Thank You

Finally the presentation and the panel came to an end, and Mr. Konietzko offered this final message for the fans:

“This is a really big deal for us. It’s been 12 years since we came up with this whole Avatar universe together. Avatar means so many different things to so many different people, but to me when I think of it and the creation of it I think of me and Mike sitting at my computer at this little rented house in burbank. We’d just share the keyboard, we would take turns, and over two weeks we cracked open this whole universe together. 12 and a half years later and it’s just blossomed into something so huge, and it’s such a big part of our lives and so many people all over the world. These characters are real to us, you know – not in a delusional way, but in an emotional way. They really mean a lot to me, and I know to Mike as well…we just want to say thanks." 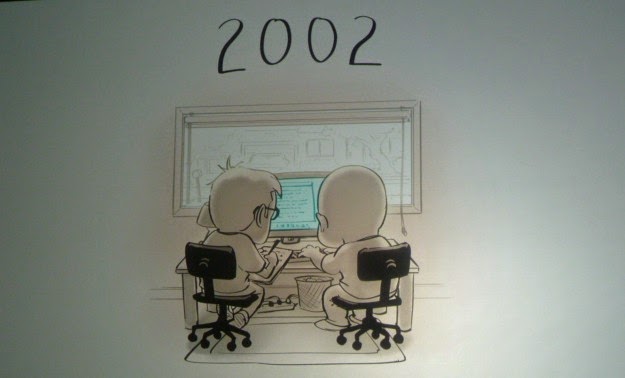 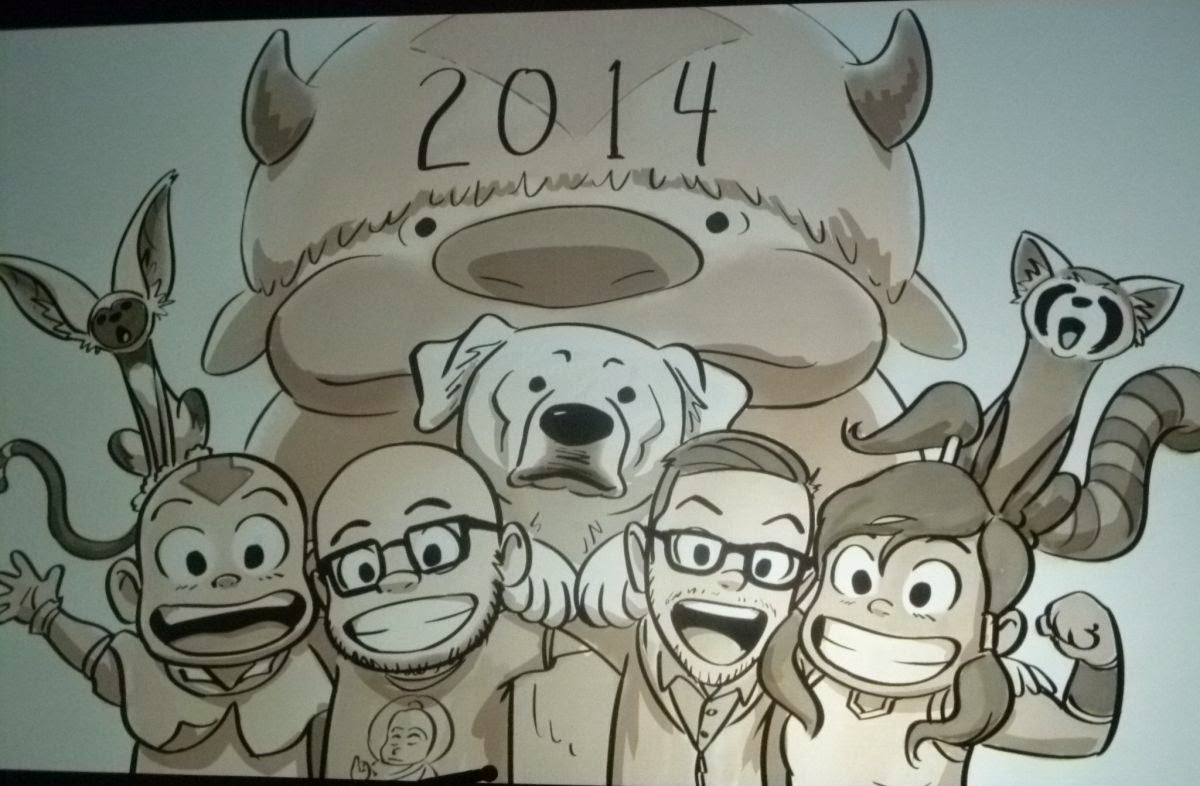 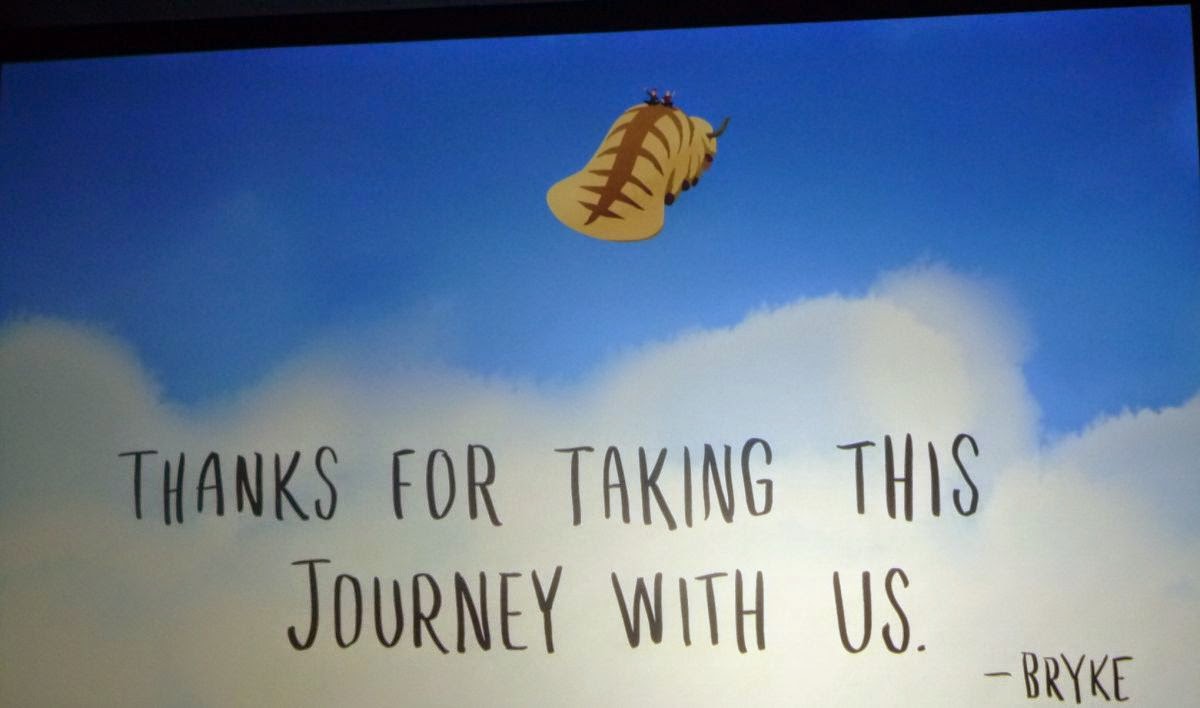