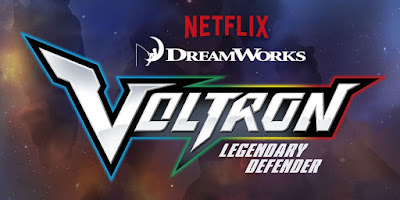 Voltron: Legendary Defender
[Source: USA Today] News that DreamWorks Animation would be partnering with the Netflix streaming service to produce a new animated series inspired by the cult-classic anime Voltron: Defender of The Universe was met with hope and caution by longtime fans of the franchise, who’ve been through multiple lackluster reboots, false starts and stalled movie productions by now to get their expectations up easily. The new series, titled Voltron: Legendary Defender, may have an impressive pedigree and a crew with its heart in the right place, but Voltron fans have more reason than most to be skeptical of modern reinterpretations.

Originally adapted via a (very) loose re-dubbing and translation by World Events Productions of the single-season “mecha” anime series Beast King GoLion, Voltron captured the imaginations of a generation of 1980s cartoon fans with its unusual mythos, serialized storytelling and sci-fi action that was well beyond anything else Western animation was offering at the time. Subsequent series have attempted to recapture that spark in the intervening decades, but only to varying degrees of success.

Voltron: Legendary Defender, from the production team of Lauren Montgomery and Joaquim Dos Santos, is looking to replicate the feel of the original series for a new audience, with an increased focus on the serialized story and an emphasis on more well-developed versions of the classic characters fans remember. Once again, the story will focus on a team of space-exploring teenagers who team up with an alien princess to protect her home planet from invaders by piloting five robotic lions which can merge together into the giant humanoid robot Voltron. Montgomery (a big name among animation fans from her work on Justice League: Crisis on Two Earths, Young Justice and The Legend of Korra) offered the following to USA Today, regarding the creative approach on Legendary Defender:

“We’re trying to keep as much of that classic feel to it as we can, because ultimately we have huge amounts of nostalgia for (the original) show.”

You can check out the first trailer for Voltron: Legendary Defender, below:

Based on the preview image, one thing that’s immediately apparent is that Voltron himself has been rendered (at least in this shot) using cel-shaded 3D animation; a technique often employed to merge the specific look of classic traditional animation with the dynamic staging expected of a modern cartoon series. What’s not immediately apparent is whether or the non-mechanical characters and backgrounds will be animated in this style as well, or use a fusion aesthetic where cel-shading is used to render mechanical objects only. The overall design, though, is highly reminiscent of the brightly-colored fantasy-esque feel of the original, which Dos Santos says was their intent:

“[One version considered was] really military and really serious, everything had chainsaws on it and was really bro’d out, and we just didn’t want that.”

Voltron: Legendary Defender is expected to debut its first season (composed of 13 22-minute episodes) on Netflix later this year, but attendees at the 2016 WonderCon in Anaheim California will be able to catch some sneak preview footage significantly sooner. The series joins a growing list of cult-classic anime shows getting unexpected revivals thanks largely to Western fans, including Cartoon Network’s recent announcement of 2 new seasons of FLCL.
Posted by anim8trix at 12:00 AM