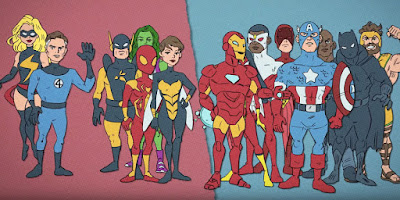 Marvel's sprawling Civil War comic-book storyline, written back in 2006, is a lot more confusing than a simple Team Cap vs. Team Iron Man clash. It encompasses mass quantities of team-ups, secret unions, imprisoned mutants and caped crimefighters spread out across the entire territory of the Marvel Universe.

To make sense of the intricacies and issues presented before the new Captain America movie unfurls in May, Noah Sterling's Bite-Size Comics has created this animated educational tool, which sifts through the clogging collection of characters featured in the vast Civil War arc.

If knowledge is power, then you should be feeling mighty strong after ingesting this funny four-minute Civil War primer. Once more unto the breach, dear friends!
Posted by anim8trix at 12:00 AM