Meet the Amazons of Themyscira 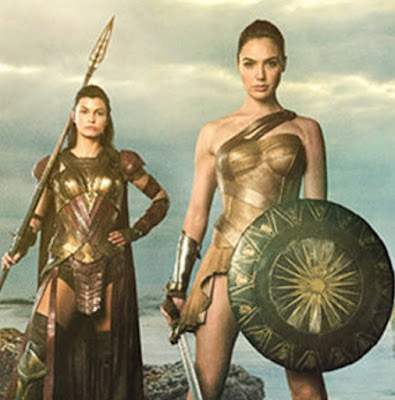 
In the DC Comics, Themyscira is an island hidden from the eyes of men where the Amazons (the ones from the Greek myths) have thrived in harmony for centuries. Sometimes called Paradise Island, it's also the birthplace of one Princess Diana of Themyscira (Gal Gadot), daughter of Queen Hippolyta (Connie Nielsen). About the island, producer Charles Roven said:


“Themyscira is influenced by the Greek but it’s clearly more than that. It’s a place that has the ‘you’ve never been to’ kind of feel. But once you’re there you’re not so sure you really want to leave so fast.”


The image released by Entertainment Weekly features the trio of immortal female warriors who have trained Diana. On Wonder Woman’s immediate left is her mother, Queen Hippolyta, who’s flanked by General Antiope (Robin Wright). On WW’s right is Antiope’s lieutenant, Menalippe (Lisa Loven Kongsli). Both Antiope and Menalippe are characters from the comics. 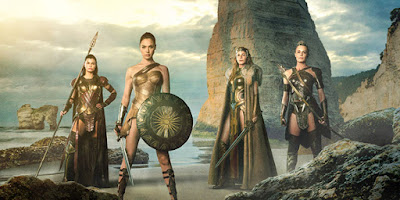 It’s Diana’s mom and her two aunts who make our warrior princess into the 5,000-year-old badass fighter we’ll meet in Batman v Superman: Dawn of Justice, before she headlines her first solo movie alongside Chris Pine as her long-time love interest, Steve Trevor. As you guys may already know, Wonder Woman will take place during World War I,  a whole century before the events of Batman v Superman.


Director Patty Jenkins says the trio of women don’t always see eye to eye. Where Hippolyta wants to shelter her daughter from the outside world, Antiope (the one responsible for Diana’s training) wants to prepare her for the world of man as Diana Prince.


“She is the only child they raised together. And their love for her manifests in a different way for each of them.”

About the look of the Amazons in the movie, she told EW, “To me, they shouldn’t be dressed in armor like men. It should be different. It should be authentic and real—and appealing to women.” But what about those totally unrealistic high heels (like, seriously?):


“It’s total wish-fulfillment,” she says, adding that the warriors have flats for heavy fighting. “I, as a woman, want Wonder Woman to be hot as hell, fight badass, and look great at the same time—the same way men want Superman to have huge pecs and an impractically big body. That makes them feel like the hero they want to be. And my hero, in my head, has really long legs.”