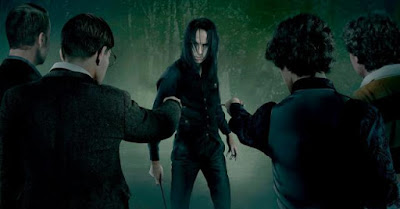 Severus Snape and the Marauders
[Source: PopSugar] One of the most common desires in Harry Potter fan circles is for J.K. Rowling to write a series of books about the Marauders (aka Harry's father, James Potter, and his best friends from Hogwarts, Sirius Black, Remus Lupin, and Peter Pettigrew). While Rowling has, sadly, shot down ideas about a Marauders prequel in the past, that doesn't mean that fans can't take things into their own hands! Enter: Severus Snape and the Marauders, a high-budget Harry Potter fan film, paid for and created entirely by diehard Potterheads.

The 25-minute film centers on Moony, Wormtail, Padfoot, Prongs, and the Half-Blood Prince as they bid Hogwarts goodbye and enter the real wizarding world — and trust us, if you're a fan, you need to set aside time to watch the entire thing. The casting of Severus Snape, Remus Lupin, and Peter Pettigrew is particularly excellent, and the fan film is so high quality that you'll feel as if you're watching a brand-new Harry Potter movie.

Still not convinced that it's worth your time? Just read the creators' description of the plot:

Set in 1978, Severus Snape, James Potter, Sirius Black, Remus Lupin, Peter Pettigrew, and Lily Evans have just graduated from Hogwarts School. As James and his friends, known only to each other as the Marauders, drink at a bar, Snape enters as well, hoping to find Lily. Knowing their dark future, and the part Snape might play in the First Wizarding War, James decides to do something about his long-time rival once and for all.

This isn't your average fan film . . . press "play" to experience the magic for yourself!
Posted by anim8trix at 12:00 AM